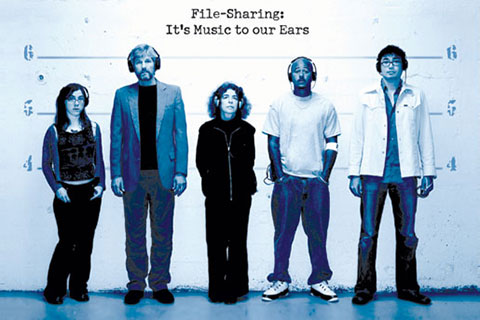 Kaye "Nana" Griffin, an Indybay co-founder, passed on in early August. Nana was involved in the Bay Area activism scene for decades, including queer liberation, housing and many other local struggles. Nana also carried one of the first Indybay press passes. Her memorial service is on Saturday, October 21, 2:00 PM, at the Center for Sex and Culture, 1349 Mission St. in San Francisco.

John Gilmore shared an Electronic Frontier Foundation (EFF) advertisement while recalling, "Kaye got around to many Bay Area subcultures. Here's one of her appearances in the digital rights subculture. This full page ad appeared in 2003 in Rolling Stone magazine, featuring Kaye in the middle of the lineup. [...] She was involved in so many things that I suspect that none of us knew the full extent of her activities and activism."

Keith McHenry also provided a short reflection, "Kaye spent many hours volunteering with San Francisco Food Not Bombs and reported on the arrests and court cases posting on Indybay. She participated in nearly all the huge protests with her pet rat on her shoulder and I remember her insightful comments about a wide range of issues. Her vision of what is wrong with the political and economic system and ideas of where to take action to move our world forwards was spot on."