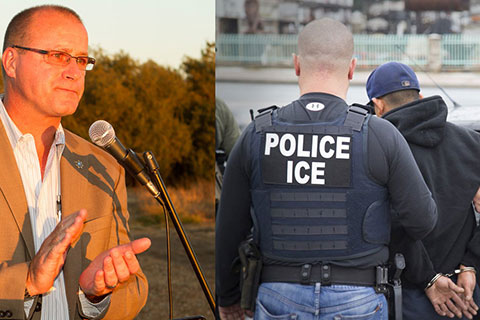 At a meeting between representatives of the Santa Cruz chapter of ACLU of Northern California; Sanctuary Santa Cruz; Peace United Church of Christ; and the Public Defender’s Office on April 19, Santa Cruz County Sheriff Jim Hart was presented evidence of the ongoing arrangement whereby the Sheriff’s Office notifies ICE of release dates of arrested but non-convicted undocumented locals. When confronted with this evidence Hart confirmed the jail policy of cooperation and agreed to consider the information presented to him about other jurisdictions who refused to cooperate with ICE.

At a meeting on May 10, however, Hart said that he would not change Santa Cruz County's Jail policy. Hart has claimed publicly that the Sheriff’s Office and jails do not assist in immigration enforcement in any way. However, Sanctuary Santa Cruz and other local activists consider that Sheriff Hart’s voluntary sharing of release dates is assisting in immigration enforcement.

"Words are not enough," comments Ernestina Saldana, lead coordinator of Sanctuary Santa Cruz, "It’s time for Hart to put his actions with his words. There’s no reason for him to cooperate in advance. There’s no reason to make it easier for ICE to deport people."