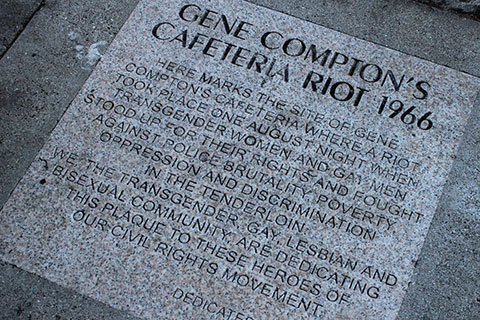 The San Francisco Trans March is San Francisco's largest transgender Pride event and one of the largest trans events in the entire world. It's always the Friday of Pride weekend and thousands of people attend. The 12th annual Trans March was held on June 24, 2016, and this year's theme was "We Are Still Here Embracing Our Legacy." This year is also the 50th Anniversary of the Compton's Cafeteria Riot that occurred in 1966 at the corner of Turk and Taylor streets in San Francisco.

Thousands of people marched through the streets of downtown San Francisco, including the Mission District and Castro, loudly proclaiming we are still here. Many allies and friends of transgender people also attended the march. At the end of the march, a new sign commemorating Compton's Cafeteria Riot was revealed at the corner of Turk and Taylor streets. A portion of Taylor Street has been named Compton’s Cafeteria Way.

At the pre-march event, politicians Mark Leno, David Chiu, and Mayor Ed Lee were booed off stage. Janetta Johnson, Executive Director of the TGI Justice Project and a 2016 San Francisco Pride Grand Marshall, announced on stage she would not attend the parade because of the increased police presence.

Trans March and friends of Jazzie Collins celebrate her life |