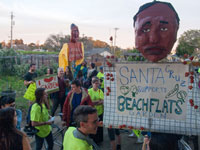 With the hope of nudging the city forward toward making good on its months-old public promise to initiate permanent investment in the Beach Flats Community Garden, and under imminent threat of legal proceedings against them, on February 16 the gardeners of Beach Flats decided to sign a city letter acquiescing to temporarily leaving the garden plots they have tended so carefully over the past two decades.

Even as the gardeners signed the letter, they added a list of specific actions they hope the city will undertake to demonstrate its long-term commitment to this vulnerable neighborhood. In a joint statement, the gardeners assert that the letters were signed under city pressure and threats, but that they hope that the whole garden can still be protected permanently and that mature perennials such as fruit trees and nopales not be disturbed before they produce this year.

They also request that several long-standing problems with the garden space be addressed, including providing facilities such as water pipes that do not leak, functioning hose faucets, a bathroom, and outdoor light fixtures. In addition, they ask that the city work directly with a committee of gardeners in the ongoing management of the Garden. Finally, gardeners emphasized that it is time to protect the whole garden.