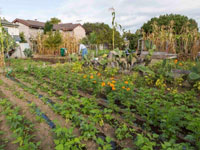 On October 27 the Santa Cruz City Council voted unanimously to support the creation of a permanent garden owned by the City, on the site of the current Beach Flats Community Garden. Community members have applauded this as a great start, but the Seaside Company, owner of the Santa Cruz Beach Boardwalk, has plans to take part of the garden for other uses unless the City intervenes by November 13. The City has not committed to challenge the Seaside Company's plan to take over more than a third of the garden for other uses as of that date.

The Garden produces organic, non-GMO food that is shared with the community, including culturally relevant food not available elsewhere. The City's General Plan says that for every 1,000 residents in a neighborhood, there must be at least one acre of green space. The Garden is the largest and only available green space in Beach Flats and is only a half acre in its entirety. There are about 2,600 residents there.

Community members organizing to save the Garden say now is the time to write letters to both the City Council and local media outlets to encourage the Council to tangible action to protect this vital community resource.