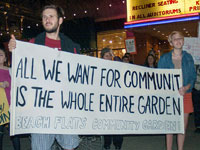 On February 9, hundreds of people marched through downtown Santa Cruz from the Beach Flats Community Garden to the City Council meeting. Gardeners, along with a large coalition of supporters, are seeking a creative solution to preserve twenty five years of cultivating food and culture in the heart of the Beach Flats.

Over the past year, the gardeners have sought community support. When 4,000 people signed a petition and 200 people showed up to a City Council meeting last fall, the city agreed to attempt to negotiate a sale with the owners of the property. Seaside Company also owns the Beach Boardwalk and much of the rest of the Beach Flats neighborhood. However, since that meeting city leaders have failed to represent the community’s needs. Instead of negotiating a long-term solution with Seaside Company, the Council is agreeing to a short-term lease of three years for only 60% of the property.

Beach Flats Community Gardeners and their supporters marched to City Hall on February 9 to ask that the City Council do the following. First they asked that the city take real steps towards negotiating for the acquisition of the garden, such as doing an appraisal and bringing in the Office of Economic Development to protect the entire garden. They want the Seaside Company to not damage anything in the 40% they want to take over while negotiations over the acquisition of the property take place, and they want the company to refrain from taking legal action against the gardeners or punishing their activism.