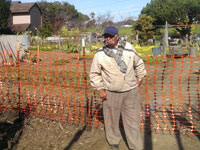 At about 10 am on February 3, a gardener and supporter of the Beach Flats Community Garden relayed the following information via text message, "City is clearing out gardeners stuff right now." By noon, a fence was up and the city's crew was gone. On the previous day, supporters of the garden announced the launch of a grassroots fundraising campaign to assist the City of Santa Cruz in purchasing the current garden from the Seaside Company, but the city is threatening legal action.

Using bright orange plastic fencing, the city fenced off 40% of the site, which the Seaside Company plans to use for business purposes related to the operation of the Santa Cruz Beach Boardwalk. Gardeners and garden supporters have been working hard over the past eight months to meet with city officials, and convince the City to enact eminent domain or purchase of 100% of the garden. In a resolution declared unanimously by City Council on October 27, the city manager was directed to “negotiate with the goal of acquisition of the current Beach Flats Garden property to allow it to continue permanently as a community garden operated by the city.” However, Seaside Company has indicated they are not interested in sale of the land, and to date, no negotiations have taken place.

A whole community has grown around the garden. Now, after 25 years of organic cultivation, Seaside wants the land back "in the condition it was given," which is strange considering the site was a toxic dumping ground before it was transformed by Beach Flats neighbors. Garden advocates hope that by collecting small and large donations, enough money will be raised to show the city that the people of Santa Cruz are invested in protecting this local gem.