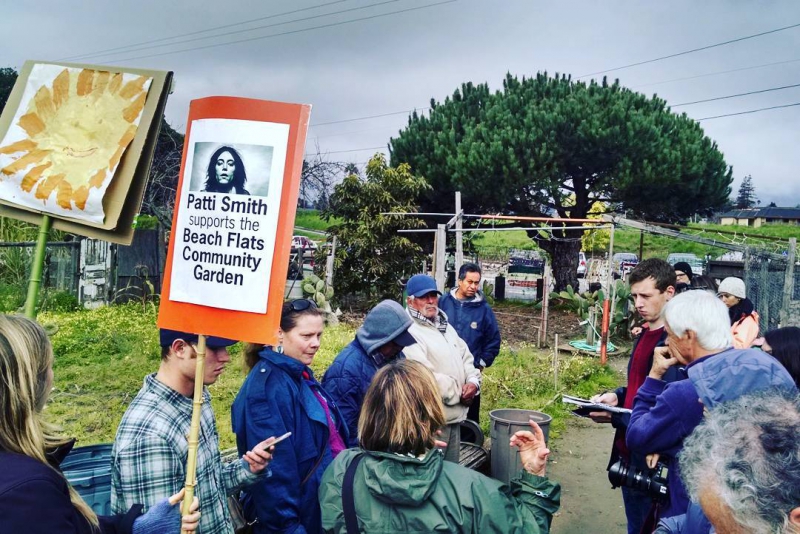 original image (1080x722)
Today, February 02 2016, a press conference was held at the Beach Flats Community Garden to announce the launch of a grassroots fundraising campaign to assist the city in purchasing the current garden from Seaside. Gardeners and garden supporters have been working hard over the past eight months to meet with city officials, and convince the City to enact eminent domain or purchase of 100% of the garden.

In a resolution declared unanimously by City Council on October 27, 2015, the city manager has been directed to “negotiate with the goal of acquisition of the current Beach Flats Garden property to allow it to continue permanently as a community garden operated by the city.” However, Seaside Company has indicated they are not interested in sale of the land, and to date, no negotiations have taken place.


As of last week, the city has signed a lease with Seaside for 60% of the current garden over the next three years. Seaside has scheduled to put up a fence closing off 40% of the garden today.

Instead of collaborating with gardeners for a creative solution, the city has sent out a communique indicating that thus far, gardeners have been uncooperative, and the city is now threatening legal action. The department of Parks and Recreation is also not guaranteeing garden spots to the current gardeners, despite 17 gardeners sending a letter to the department indicating their continued interest in gardening, expressing their "faith and trust in the city to follow through on their promise."


A whole community has grown around this garden. Now, after 25 years of organic cultivation, the Seaside wants the land back "in the condition it was given," which is strange considering the site was a toxic dumping ground before it was transformed by Beach Flats neighbors.

Garden advocates hope that by collecting small and large donations from the 4,000 signatories of the petition, enough money will be raised to show the city that the people of Santa Cruz are invested in protecting this local gem.

On February 27th, 2-4PM, there will be a Pie Potluck & Fundraiser Event at the Nueva Vista Community Center, 133 Leibrandt.

http://beachflatsgarden.org/
§EDIT FROM AUTHOR
by Irene O'Connell Tuesday Feb 2nd, 2016 3:22 PM
The city has not yet signed the 40/60 lease as of February 2, 2016.
Add Your Comments
LATEST COMMENTS ABOUT THIS ARTICLE
Listed below are the latest comments about this post.
These comments are submitted anonymously by website visitors.