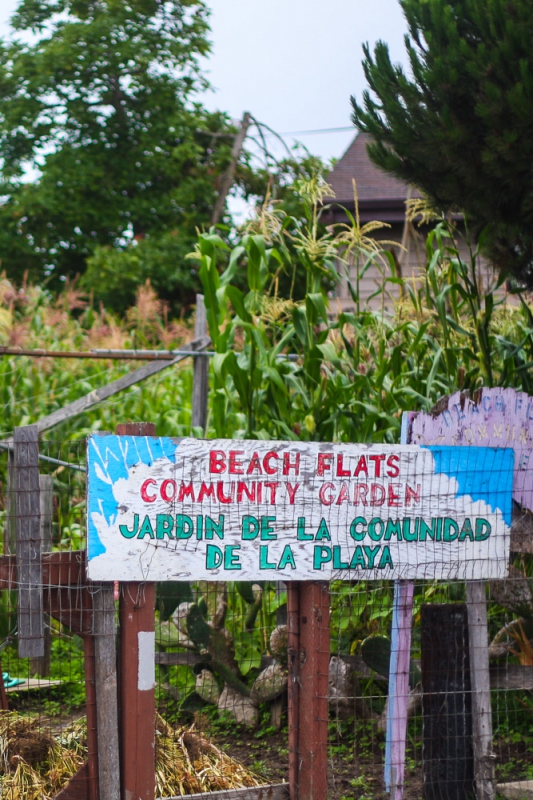 original image (667x1000)
The Beach Flats Garden Coalition announced it is organizing a community fundraising campaign to help the City of Santa Cruz purchase the Beach Flats Community Garden property. Neighborhood volunteers have spent over 20 years transforming this once derelict dumping ground into a verdant oasis, cited recently by researchers for its outstanding biodiversity and cultural significance. Meanwhile, the city has indicated it intends to fence off 40% of the site (well over half of the cultivated land) on Tuesday, February 2, and eject all but one of the current gardeners from their plots.

Gardeners and coalition members will be available to speak with the press about the recent developments this Tuesday, February 2nd at noon, at the garden site on Raymond Street between Leibrandt and 3rd.

In October, the City Council voted unanimously to negotiate purchase of the current site as a public park. Current gardeners, as well as hundreds of community supporters, have spent hours in meetings with city officials in the effort to cooperate and support creative plans to save the entire garden. On January 25th, three gardeners delivered a letter signed by seventeen of their colleagues, saying they are “hoping and trusting in the work being done by the city to buy the land.” The letter, delivered in person to Parks and Recreation director Dannettee Shoemaker, stated that all gardeners who signed “wish to continue growing food here in the Beach Flats garden.”

Community members now fear that City leaders are showing signs of backing away from their commitment to the garden. Despite the City Council’s October resolution to attempt to purchase the entire garden, city staff has not yet begun the negotiations process. Instead, as expressed in an unexpected statement sent to gardeners on January 30, the City Council “has directed the City Attorney to prepare to initiate appropriate legal action” against them, ignoring the gardeners’ continued interest in gardening.

The Santa Cruz community is stepping up to help the Council achieve its promise. “At the moment, we are speaking with major donors who are interested in making matching grants. If every one of the 3900 people who signed the petition in support of the garden donates just $10, we will be able to raise a significant part of the purchase price ,” said Lynne Cooper, fundraising committee member. “While this is just the beginning, we hope the City sees how excited we are to find a creative solution to this community need.” Cooper said the group plans to hold a fundraising kickoff event later this month.

Gardeners and advocates alike concur with Kris Reyes, Santa Cruz Seaside Company spokesperson, who stated in a recent interview on KAZU that the city needs to start talking about “creative solutions” to protect this garden. Garden supporters hope that the fundraising campaign will encourage the City to do just that.

To contribute, go to:
https://www.everribbon.com/ribbon/donate/26087
Related Categories: Santa Cruz Indymedia | Environment & Forest Defense | Health, Housing & Public Services
Add Your Comments
Latest Comments
Listed below are the latest comments about this post.
These comments are submitted anonymously by website visitors.
TITLE
AUTHOR
DATE
Can you post the Jan 30 statement sent to gardeners?
wondering
My understanding...
Razer Ray
Support Independent Media
We are 100% volunteer and depend on your participation to sustain our efforts!