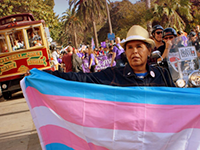 Same-sex weddings took place across the country after the Supreme Court ruled on June 26 that all 50 states must now permit LGBTQ couples "the fundamental right to marry." The historic decision puts an end to marriage equality bans that remained in 14 states, impacting tens of thousands of couples. The plaintiff in the case, Jim Obergefell, celebrated the victory: "Today’s ruling from the Supreme Court affirms what millions across this country already know to be true in our hearts: Our love is equal..."

After the Supreme Court’s historic ruling on marriage equality, many LGBT organizers are now redirecting their attention to obtaining federal, state and local legal protections in areas of employment, housing and commerce. Nationwide, anti-discrimination laws for gay people are inconsistent and unequal with only 22 states barring discrimination based on sexual orientation.

Locally, activists want to shift the focus to issues that LGBT immigrants face in detention centers across the U.S. Transgender activists indicate that LGBTQ immigrant detainees are uniquely vulnerable to abuse, including sexual assault, while in custody. In prison settings, non-heterosexual prison inmates report sexual assault is higher than heterosexual inmates, with almost 40 percent of transgender inmates in prisons are sexually assaulted.

In San Francisco, kicking off Pride weekend on June 26 was a trans rally and march. As is custom, the rally was held in Dolores Park, then the Trans March worked its way through the streets of the Mission into downtown SF. The San Francisco Trans March is San Francisco’s largest transgender Pride event and one of the largest trans events in the entire world.

Armed Trans People Will Not Get Bashed! |

Stonewall Was a RIOT: No Pride in Police Brutality |