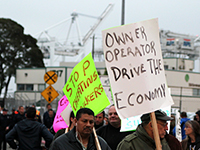 Oakland Port Truckers have formed the Port of Oakland Truckers Association (POTA) to organize for better conditions and compensation. On October 21, hundreds of independent truckers and over a hundred supporters turned out at 5am at the Port of Oakland in protest of escalating costs for truckers and deteriorating work conditions at the Port. Truckers staged picket lines at multiple terminals. The two largest terminals were shut down, and multiple smaller terminals were disrupted or shut down. Port Truckers returned to the Port at 5:30pm to shut down the evening shift, and they continue to ask supporters from the public to join them again at the SSA Terminal.

Alameda County Sheriff's Deputies attacked picket lines, injuring at least two, and forced many picketers onto the sidewalk. They cited a law prohibiting people from blocking thoroughfares and a restraining order from the Port and City of Oakland, but Dan Siegel, a lawyer with the National Lawyers Guild who was on site, confirmed that the pickets were legal and neither the law cited nor the restraining order were grounds to deny the truckers their right to picket. Longshoremen refused to cross the picket line and went home for the day, despite losing pay after an unfavorable ruling from labor arbitrators.

Owner-operator truckers are demanding that terminal owners, who make massive profits each year, offset the expense of costly upgrades needed for trucks to be in compliance with new environmental laws. Truckers are also asking to be paid when they are forced to sit in long lines waiting for cargo loads for two hours or more. They can wait in lines up to 8 hours, which limits the amount of loads they can haul in a day and requires them to burn fuel, which they pay for. With the new SSA merger of multiple terminals on the port, congestion is at an all-time high, while SSA has only hired 20 new Longshoremen to alleviate Port traffic.

Port Truckers and Community Activists Converge to Shut Down the Port |

Port of Oakland Strike is Underway |

Port Truckers SHUT DOWN THE PORT OF OAKLAND