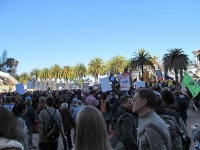 On February 17th, while 350.org and the Sierra Club led the largest climate protest in US history in Washington, DC, their Bay Area chapters held a West Coast solidarity rally. In San Francisco 5,000 people surrounded the US Department of State building at 1 Market street, then marched to demonstrate at Bradley Manning Plaza.

More than 65 San Francisco Bay Area groups including World Can't Wait and Greenpeace took part in the march and rally, and there was an Idle No More gathering. Many artists donated their time and talent to create giant signs and puppets before the event while others performed musically during the march.

In San Francisco, one marcher commented that she enjoyed the fact that it was an all ages event with "lots of cute kids dressed as animals and old folks showing up as aging hippies." After the nationwide event, some participants were dismayed to find out that at the same time they were demonstrating for climate action, President Obama had been golfing with oil men in Florida.