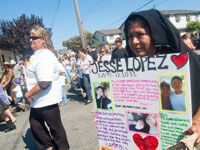 Watsonville Brown Berets write: "The Peace and Unity March has been an annual event since 1994 when the families of victims and our local community came together to organize an event to speak out against violence in the streets in South Santa Cruz County. With the increase of violence that has happened in Santa Cruz County in the last few years, it is critical to help promote and sustain events like ours. It is all our responsibility to make our community a safer place.

"Today, the march is still organized by local youth, local community groups and the growing number of families who have lost loved ones to violence. We are also working with the City of Watsonville to make the march a permanent event, co-sponsored by the City Council."

Photos: Part 1 | Part 2 | Peace and Unity in Watsonville in Style