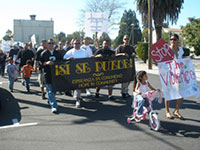 On November 1st, the 16th annual Peace & Unity March took place in Watsonville with over 100 people in attendance, including many families of victims who have died from violence. The march was started in 1994 after the tragic deaths of two local youth; Jessica (age 9) and Jorge (age 16) Cortez. The march was started by youth who wanted to send a message of barrio unity throughout Watsonville.