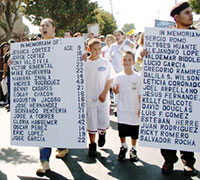 Watsonville Brown Berets write: "After the tragic gang-related murders of Jessica, 9, and Jorge Cortez, 16, in 1994, the Peace and Unity March was organized by the Watsonville Brown Berets to address the gang warfare going on in their community. The march has been historically led by families of the victims of violence, demanding an end to all violence, including war and government oppression.

Our march was to demand peace in our hoods and to educate our youth about their culture and true struggle for social justice. We believe that gang youth are our dormant warriors and, once awakened, can be a vital force to create true social change in their communities. Please join us in solidarity to help spread a powerful message to our communities."

Audio: Indynewswire: Marching in Watsonville for Peace and Unity