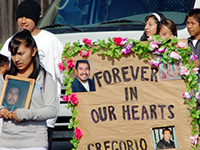 On November 4th, hundreds of Santa Cruz County residents joined the 14th annual Watsonville Peace and Unity March which began with a peace ceremony at the Watsonville Plaza. Several community leaders, family members of victims of violence and youth addressed the effects of violence in our communities.

“This march is an ongoing effort to stop the destruction of our youth and community by violence,” said Sandino Gomez, an organizer of the Watsonville Peace and Unity Coalition. “It creates a community consciousness about becoming actively involved in reducing violence and improving our neighborhoods for our future generations.”

This yearly event continues to be organized by a coalition of concerned students, parents, community-based organizations, churches and families who have lost their loved ones to gang and domestic violence. The 2007 Peace and Unity March honored over 71 local residents who lost their lives to domestic and street violence. Read More ||