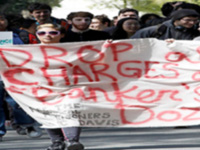 Just months after UC Davis police pepper sprayed seated students in the face during a protest against university privatization and police brutality, Chancellor Linda Katehi's administration is trying to send some of the same students to prison for their alleged role in protests that led to the closure of a US Bank branch on campus.

On March 29th, weeks after an anti-privatization action against US Bank ended with the closure of the bank’s campus branch, 11 UC Davis students and one professor received orders to appear at Yolo County Superior Court. District Attorney Jeff Reisig is charging campus protesters with 20 counts each of obstructing movement in a public place and one count of conspiracy. If convicted, the protesters could face up to 11 years each in prison, and $1 million in damages. Support has been requested for their arraignment, which has been rescheduled to May 10th.

Last year, UC Davis and US Bank entered a relationship. The deal was that US Bank would provide some money each year to UC Davis, an amount based on how many students opened up accounts with US Bank, in exchange for Davis leasing an office to the bank in the Student Union and issuing new student ID cards, ones with a US Bank logo, that could be used as debit cards. This is a deal that benefits both sides, US Bank gets a captive group of possible customers and UC Davis gets some cash. The only people who do not benefit are the students. The logic of privatization is most clear when a student ID card is branded by its corporate sponsor.