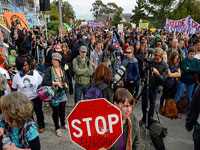 On January 9, the general assembly at Occupy Oakland passed a resolution calling on occupies across the country to support a National Occupy Day in Support of Prisoners. In the following month, over a dozen communities across the nation followed in planning local prisoner solidarity demonstrations, including those in Austin, Baltimore, Boston, Chicago, Columbus, Denver, Durham, New York, Philadelphia, Los Angeles, Fresno, Portland, and Washington D.C.

On February 20, hundreds of demonstrators marched to San Quentin Prison where a rally was held in solidarity with the National Occupy Day in Support of Prisoners.

San Quentin Prison is the first and oldest prison in the state of California, and the facility's death row is the largest in the country. In 2008, San Quentin held 637 male inmates on its death row, nearly twice as many as those held on the death rows in Florida and Texas.

The Framing of Kevin Cooper, on San Quentin’s Death Row