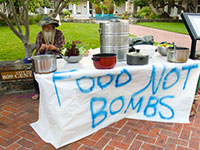 The City of Orlando, the home of Disney World in Florida, is being sued in court over a city law that has effectively made it illegal for any group to feed more than 25 people at a time in downtown parks without a permit. It also limits groups to no more than two permits per park, per year. The group Food Not Bombs has refused to obey the new law—saying food is a right, not a privilege—and has continued to serve free meals to the poor and homeless. However, over the past month more than 20 members of the organization have been arrested. Keith McHenry, who helped found Food Not Bombs over 30 years ago, was arrested on June 22nd and remains in jail.

Acting in defense of First Amendment rights, in solidarity with Keith McHenry, and to end the criminalization of poverty, Food Not Bombs-Santa Cruz organized a free meal and overnight vigil on June 30th outside Santa Cruz City Hall.