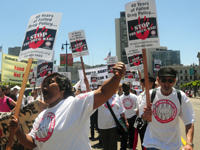 Hundreds of people turned out at San Francisco City Hall on Friday, June 17th, to participate in the "Communities Rising to End the Drug War and Mass Incarceration" rally and march to protest the 40 year "war on drugs" and continued criminalization of the poor, the addicted and communities of color.

The protest then marched to the state and federal buildings nearby. Working and poor people struggling with addiction fill the prisons and jails of the US. This country has the dubious distinction of having the largest per capita incarcerated population in the world. Protesters called for drug policy reform that would emphasize rehabilitation versus the current policy based on punitive measures. They also demanded human rights for prisoners isolated in the notorious Pelican Bay Prison in Northern California.