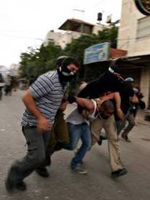 Palestinians and Allies Mark the Nakba Across the Globe
At Least 16 Protesters Killed, Hundreds Hurt by Israeli Forces During Nakba Commemorations

May 15th marked 63 years since the Palestinian Nakba (catastrophe). In 1948, more than 750,000 Palestinians were permanently displaced from their homes by Israeli forces, with more than 500 Palestinian villages depopulated and destroyed. According to the U.N. nearly five million Palestinian refugees, the largest refugee community in the world, are living in exile. Israel continues to colonize and ethnically cleanse Palestinian land through occupation and war. Recently, the Israeli Knesset passed new "Nakba laws" intended to outlaw commemoration of the day, including the withdrawal of funding to any organization that is seen to be marking "al Nakba".

Across the West Bank and Gaza, thousands took to the street to commemorate al Nakba and demand an end to the Israeli occupation of Palestine. Marches by Palestinian refugees to the Israeli border in Lebanon, Egypt, and Syria resulted in instances of protesters breaching the international borders. Israeli forces responded with live gunfire resulting in at least 16 protesters being killed, as well as hundreds injured. Amnesty International and other human rights organizations have called for investigations into the Nakba killings.