by IMEMC
Leaders from various Arab countries have begun to react Sunday’s events around Israel and the Occupied Territories, in which at least 16 protesters were killed by Israeli forces, as well as hundreds injured. Across the West Bank and Gaza, thousands took to the street to commemorate al Nakba and demand an end to the Israeli occupation of Palestine. Marches by Palestinian refugees to the Israeli border in Lebanon, Egypt, and Syria resulted in instances of protesters breaching the international borders. Israel forces responded with live gunfire resulting in many of the deaths reported. 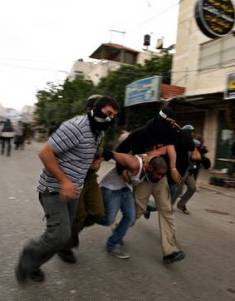 In response, Israeli Prime Minister Benjamin Netanyahu has denounced the protests, stating that the protests were not about 1967 borders or the right of return of refugees, as stated by the protesters and organizers, but were instead meant to to challenge “the very existence of Israel”.

Netanyahu defended the actions of the Israeli military, saying that the attacks on protesters were necessary to defend Israeli sovereignty. Israeli Defense Minister Ehud Barak also defended the actions of the military, placing blame for the deaths with those who crossed the border and those who sent them. He warned that these protests are just the beginning of similar problems in the future.

Hamas spokesman Tahir al Nunu, reacting to yesterday’s events, claimed that the actions of the Israeli military showed Israel’s confusion and helplessness in the face of the wave of popular movements that have swept the Middle East. Al Nanu predicted that Sunday's events could mark a turning point for the Israeli occupation of Palestine. Palestinian President Mahmoud Abbas said that the protesters' “precious blood will not be wasted” adding that “it was spilled for the sake of our nation's freedom”.

Sheikh Hassan Nasrallah, the leader of the Hezbollah resistance movement in Lebanon, also praised the actions of the protesters and predicted their right of return will be fulfilled in the near future. “Your message, loud and clear, to the enemy is that you will liberate your lands, that the fate of this entity (Israel) is demise, and that no initiatives, treaties or borders will protect it. You, the honorable, have given the Nakba new meaning”, he said. Iranian Foreign minister Ali Akbar Salehi also condemned the killing of protesters by the Israeli military and called on the international community to hold it accountable.

The Lebanese Mission to the United Nations has filed a complaint against Israel, and Israel promised to do the same against Lebanon and Syria, to the UN Security Council. Lebanon claims the Israel military violated Lebanese sovereignty and fired shots into the town of Moroun al Ras near the Lebanese-Israeli border. Israel in return claims the move toward the Israeli border by protesters showed a clear disregard for Israeli sovereignty.
END_OF_DOCUMENT_TOKEN_TO_BE_REPLACED
Related Categories: Palestine | International
§150 Palestinians Injured By Army Fire In Ramallah
by IMEMC
Palestinian medical forces reported Sunday that at least 150 Palestinians were injured by Israeli military fire, while dozens of residents were kidnapped as the army opened fire at the “Return Protests” in Ramallah and Al Biereh on Sunday.

A source at the Ramallah governmental hospital said that 150 residents were admitted to the hospital, including seven who are in serious conditions. Rubber-coated metal bullets hit dozens of the wounded, while dozens of residents were treated for the effects of teargas inhalation.

Clashes took place in different parts of Ramallah and its surrounding areas as hundreds of residents also marked the 63rd anniversary of the Nabka.

Soldiers stationed at the Qalandia terminal, south of Ramallah, fired rounds of live ammunition, rubber-coated metal bullets and gas bombs at the protestors.

Clashes also took place at the Atara roadblock as the soldiers opened fire at dozens of school students near the roadblock that separates Ramallah from dozens of villages and towns near the city and in the northern part of the West Bank.

Furthermore, clashes were reported at a roadblock, north west of occupied Jerusalem, as the army pushed hundreds of soldiers near and around Israeli settlements encircling the city.

In addition, troops attacked dozens of protesters in Anata town, northeast of Jerusalem. Similar clashes occurred in different parts of the West Bank as Israel pushed more than 10.000 soldiers into the occupied territories, and imposed a strict siege on the West Bank.

Ten persons were killed as Israeli troops opened fire at hundreds of Palestinian and Lebanese protesters, who marched near the border fence thousands marking the Nabka; more than 100 were injured, some seriously.

The protesters tried to march towards the border and the Lebanese army fired rounds of live ammunition into the air to prevent them from reaching the border with Israel.

The Qatar-based Al Jazeera reported that thousands of Palestinian refugees living in refugee camps in Lebanon marched towards the border with historic Palestine in parallel with similar marches in Ramallah, Gaza, Syria and Egypt defying the Israeli occupation and marking the Nakba when Israeli forces and armed militias forced hundreds of thousands of Palestinians out of their villages and towns to establish the state of Israel in 1948.

The number of Palestinian refugees now is more than 4 million persons living in refugee camps in the Gaza Strip, the West Bank, several Arab countries and in different parts of the world.
END_OF_DOCUMENT_TOKEN_TO_BE_REPLACED
§Amnesty International Calls For Investigation Into Nakba Killings
by IMEMC
Amnesty International has called on the Israeli state to undertake a full, impartial and independent investigation into the Israeli military actions during the Nakba day commemorations. At least 12 people were killed and hundreds injured around the West Bank and on Israel’s borders to Lebanon and Syria and the Gaza Strip.

“Amnesty International is seriously concerned at reports that the Israeli military used excessive force, killing and maiming individuals who were not posing a threat to the lives of the soldiers or others”, the organisation said in a press release yesterday. The report noted claims of the extensive use of tear gas, rubber coated bullets, stun grenades and live bullets.

The organisation also raised concerns that the controversial Israeli “Nakba laws”, recently passed by the Knesset, are contradictory to basic rights of free speech. The laws allow for the withdrawal of funding to any organisation in Israel that is viewed to commemorate “al Nakba”, or “the disaster”, the term used to describe the foundation of the Israeli state and the subsequent ethnic cleansing of Palestinians from Israel.
END_OF_DOCUMENT_TOKEN_TO_BE_REPLACED
Add Your Comments
Support Independent Media
We are 100% volunteer and depend on your participation to sustain our efforts!