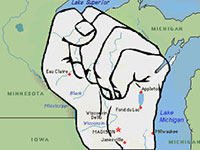 We are One Rallies in Solidarity with Wisconsin on April 4th
Rallies in Northern California & Across U.S. on Anniversary of Dr. King’s Assassination

On April 4, 1968, Dr. Martin Luther King Jr. was assassinated in Memphis, where he had gone to stand with sanitation workers demanding their dream: The right to bargain collectively for a voice at work and a better life.

On Monday, April 4th, 2011, local coalitions participated in nationwide actions to support Wisconsin workers, public services and the middle class. Organizers of the rally at the Santa Cruz County Government Center stated, "Dr. King was killed in Memphis, TN, where he had stood with sanitation workers who were struggling for the right to bargain collectively. The actions by Wisconsin Governor Scott Walker to eliminate collective bargaining – and the gradual eroding of the American middle class - only undermine that struggle."