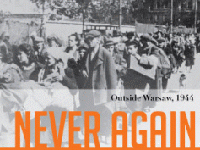 In commemoration of international Holocaust Remembrance Day, from January 24th to February 19th the International Jewish Anti-Zionist Network, American Muslims for Palestine, and the Middle East Children's Alliance sponsored a 13-city speaking tour throughout the U.S. and Canada called "Never Again for Anyone" featuring Auschwitz survivor Dr. Hajo Meyer. During his appearance in Oakland on February 17th, Dr. Meyer was joined by UC Berkeley professor Dr. Hatem Bazian, chairman of the American Muslims for Palestine, and Sarah Kershnar of the International Jewish Anti-Zionist Network. The large church was filled to near-capacity with those wanting to hear the speakers. The event was protested outside by demonstrators waving Israeli and American flags.

Two days later, Dr. Meyer sat down with Bay Area filmmaker David Zlutnick from Upheaval Productions for a video interview before the last stop of the tour in Los Angeles.

See also: Occupation Has No Future: Militarism + Resistance in Israel/Palestine