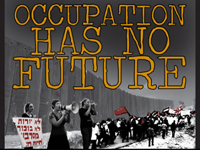 In the fall of 2009, a group of war resisters and veterans from San Francisco traveled to Israel and Palestine to meet with their Israeli counterparts in an effort to strengthen connections and share experiences. The group, calling itself Dialogues Against Militarism (DAM), partnered with David Zlutnick, a Bay Area filmmaker, to ensure that the voices and stories of those they spoke with would be captured and return with them to the United States.

Through conversations with Israeli conscientious objectors, former soldiers, and civil society activists, Occupation Has No Future creates a survey of the current atmosphere in the State of Israel. The film explores the Israeli social environment that creates such heightened militarism and leads to attitudes of fear, exclusion, racism, and ultimately aggression. Interviews demonstrate how institutions like the education system and religion, along with practices of victimization, xenophobia, and alienation all contribute to the state’s ability to maintain popular support for conscription and militarization, while simultaneously preserving belief in its label as the “only democracy in the Middle East.”