OCCUPATION HAS NO FUTURE: Militarism + Resistance in Israel/Palestine 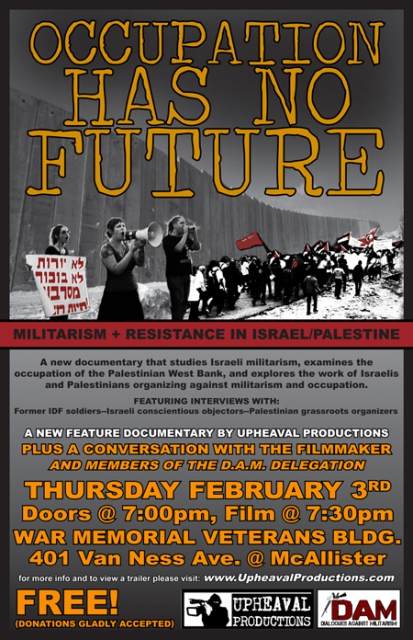 The Bay Area Premiere of

OCCUPATION HAS NO FUTURE:
MILITARISM + RESISTANCE IN ISRAEL/PALESTINE

A new documentary by UPHEAVAL PRODUCTIONS that studies Israeli militarism, examines the occupation of the Palestinian West Bank, and explores the work of Israelis and Palestinians organizing against militarism and occupation.

Featuring a discussion w/ director David Zlutnick and members of the Dialogues Against Militarism delegation that inspired the film.

In the Fall of 2009 a group of war resisters and veteran organizers from San Francisco traveled to Israel/Palestine to meet with their Israeli counterparts in an effort to strengthen connections and share experiences. The group, calling itself Dialogues Against Militarism (DAM), partnered with David Zlutnick, a local filmmaker, to ensure that the voices and stories of those they spoke with would be captured and return with them to the United States.

Occupation Has No Future is the result, and uses DAM's trip as a lens to study Israeli militarism, examine the occupation of the Palestinian West Bank, and explore the work of Israelis and Palestinians organizing against militarism and occupation.

Through conversations with Israeli conscientious objectors, former soldiers, and Palestinians living under occupation, Occupation Has No Future creates a survey of the current atmosphere in the State of Israel and the West Bank. The film explores the Israeli social environment that creates such heightened militarism and leads to attitudes of fear, exclusion, racism, and ultimately aggression; and examines the consequences of Israeli policies both for the Palestinian people as well as for Israeli civil society.

Additionally, this documentary looks at the Israeli anti-militarist movement and those Israeli youth refusing conscription, refusing orders, and choosing to partner with a growing grassroots Palestinian campaign of civil disobedience to defeat the occupation. Honest about the extremely daunting challenges, Occupation Has No Future ultimately tracks the hope of a growing number of Israelis and Palestinians to live together, free from occupation, with peace and justice.

FOR MORE INFORMATION AND TO VIEW A TRAILER PLEASE VISIT:

http://www.UpheavalProductions.com/Occupation-Has-No-Future
END_OF_DOCUMENT_TOKEN_TO_BE_REPLACED
Added to the calendar on Sat, Jan 15, 2011 5:53PM
§Occupation Has No Future: Militarism + Resistance in Israel_Palestine -- Trailer
by Upheaval Productions
Copy the code below to embed this movie into a web page:
Download Video (13.5MB) | Embed Video
Occupation Has No Future trailer
END_OF_DOCUMENT_TOKEN_TO_BE_REPLACED
Add Your Comments
Support Independent Media
We are 100% volunteer and depend on your participation to sustain our efforts!