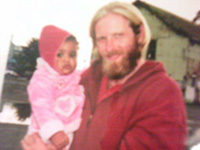 Martin Cotton II was living houseless and unarmed on August 9th, 2007, when he was severely abused by police, and brought to the Humboldt County Correctional Facility. At the jail, he was further attacked by guards, and left to die on the floor of a cell. Eureka police brutally beat Martin in front of many people, mostly men staying at the Eureka Rescue Mission. The last part of the fatal beating occurred behind locked doors in the jail, with some of it caught on video.

On Monday, January 10th, a federal civil rights trial, brought on behalf of Martin Cotton's baby daughter, Siehna Cotton, and by Martin's father, Marty Cotton, will begin in Oakland: Siehna Cotton et al. v. Eureka Police Dept. and Humboldt County Sheriff's Dept. Members of Redwood Curtain CopWatch say, "While we can have little to no faith in the court system to be an arbiter of justice, we want to fill the courtroom throughout the trial. The presence of people opposed to state violence and murder is important for a jury to see, is critical support for the Cotton family and vulnerable witnesses, and in many ways can teach us more about the system we are up against."

See also: Sheriff's Officers Opened Fire On Robert Garth: "The cops didn't even give him a chance"