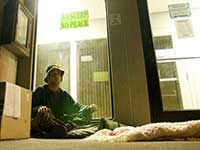 On the night of Monday, August 9th, between 20 and 40 people gathered, many laid out in sleeping bags, for the 37th night of Peace Camp 2010's high profile protest at the Santa Cruz County Building. Shortly after 4am on Tuesday morning, eight Sheriff's deputies were ticketing, evicting, and hauling two people to jail. Five more people were cited. Housed activists Linda and Coral both got their first citations; they had joined the protest in solidarity and were "caught" sleeping when the deputies made their 6th raid of the week.

As Tuesday morning dawned, about eight people remained on the steps of the courthouse building, seated next to "End the Sleeping Ban" signs. The group awaited the return of two jailed activists, while a third, Gary Johnson, was still being held. There have been 24 citations, with the arrest total at an additional 9, mostly on the same charge of violating California's anti-lodging law PC 647e, a "disorderly conduct" code which could result in jury trials and public defenders.

Homeless advocate Robert Norse states that the core message of the demonstration, left out of corporate media reports, "is the homeless have created a safe place to sleep and use the bathroom, because the city and the county refuse to do so, instead using a law to make sleeping at night a crime."