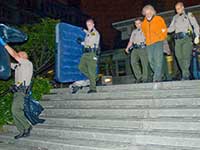 On August 7th, shortly before midnight, Santa Cruz County Sheriffs began to awaken and arrest constitutional lawyer Edward Frey as he slept on the plaza of the County Courthouse. It was the 35th consecutive night of Santa Cruz Peace Camp 2010, a demonstration against the Santa Cruz Sleeping Ban, officially known as M.C. 6.36.010, which makes it a crime to sleep outdoors in Santa Cruz, with or without bedding, at any time between the hours of 11pm to 8:30am.

On the night of Sunday, August 8th, eight deputies arrived around 11pm to harass, interrogate and cite two more Peace Camp stalwarts, Chris Doyon and Collette Connally, as they tried to sleep. The wet cold night held health problems for Doyon who said he'd picked up pneumonia after being held for four hours in handcuffs in a police van on Saturday morning, and then stripped of most of his clothes in jail.