Add an Event
Newswire
Calendar
Features
Home
Donate
From the Open-Publishing Calendar
From the Open-Publishing Newswire
Indybay Feature
Publish to Newswire
Add an Event
Related Categories: Santa Cruz Indymedia | Government & Elections | Health, Housing & Public Services | Police State & Prisons
Attorney Ed Frey Arrested on 35th Night of Santa Cruz Peace Camp 2010
by ~Bradley (bradley [at] riseup.net)
Sunday Aug 8th, 2010 2:37 PM
On Saturday, August 7th, shortly before midnight, Santa Cruz County Sheriffs began to awaken and arrest constitutional lawyer Edward Frey as he slept on the plaza of the County Courthouse. It was the 35th consecutive night of Santa Cruz Peace Camp 2010, a demonstration against the Santa Cruz Sleeping Ban, officially known as M.C. 6.36.010, which makes it a crime to sleep outdoors in Santa Cruz, with or without bedding, at any time between the hours of 11pm to 8:30am. 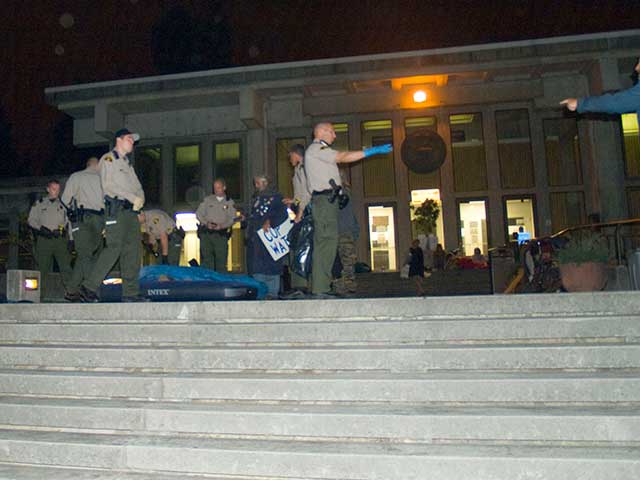 A violation of 647(e) is a disorderly conduct misdemeanor for every person "who lodges in any building, structure, vehicle, or place, whether public or private, without the permission of the owner or person entitled to the possession or in control of it."

After the U.S. Civil War, the South passed Black Codes, laws that tried to control freed black slaves. Vagrancy laws were included in these codes. Homeless unemployed black Americans were arrested and fined as vagrants. Usually, the person could not afford the fine, and so was sent to county labor or hired out to a private employer.

Santa Cruz County Sheriffs distributed warnings on sheets of 8.5 x 11 paper, sans letter heading or signature, that states in all capital letters, "You are lodging here without the permission of the owner or the person entitled to control the property. Therefore, you are in violation of California Penal Code Section 647(e), a misdemeanor. If you continue to lodge here, you will be cited and/or arrested for this violation. This action is not intended to interfere with your non-lodging demonstration during business hours. Lodging at any time will not be tolerated."

The citations and arrests lasted until nearly 6:00am on Sunday morning. Peace Camp demonstrators say that despite their lack sleep and ongoing law enforcement actions by Santa Cruz County Sheriff Phil Wowak's deputies, they will continue to challenge laws making it illegal for people experiencing homelessness to sleep at night in Santa Cruz.

The police, courts and politicians, backed by merchants, would like for the demonstration to go away. They prefer to point to the services offered within Santa Cruz, even though those services, such as shelter space, are unavailable to the vast majority of people experiencing homelessness in Santa Cruz on any given night.

Santa Cruz County Sheriff Wowak made this clear to a reporter for the Sentinel, "Our goal was to avoid taxing the judicial system, but I think at this point the crowd wants this type of process to occur, unfortunately."

On Sunday morning, the moral among the protesters was very high, according to a tweet from the camp. "Peace Camp 2010 lives and others are already returning. Estimate 15 people and two dogs on site. WE ARE NOT AFRAID !!" 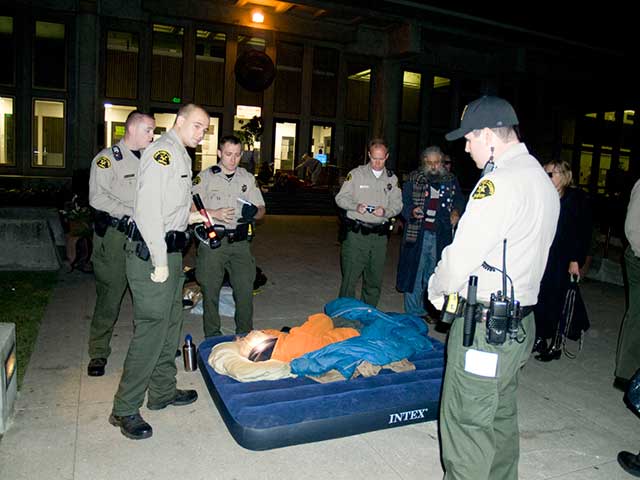 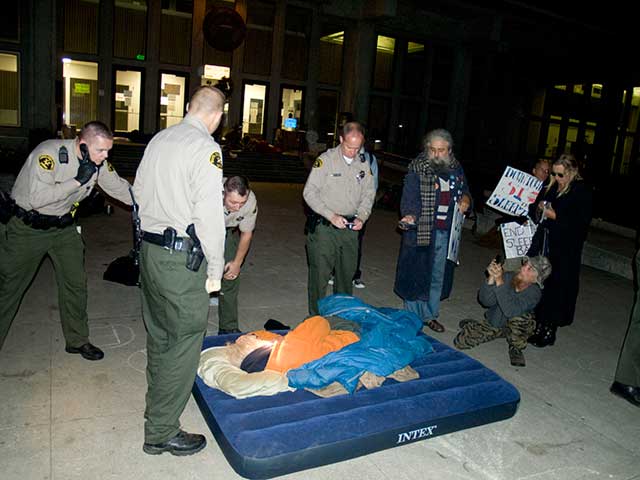 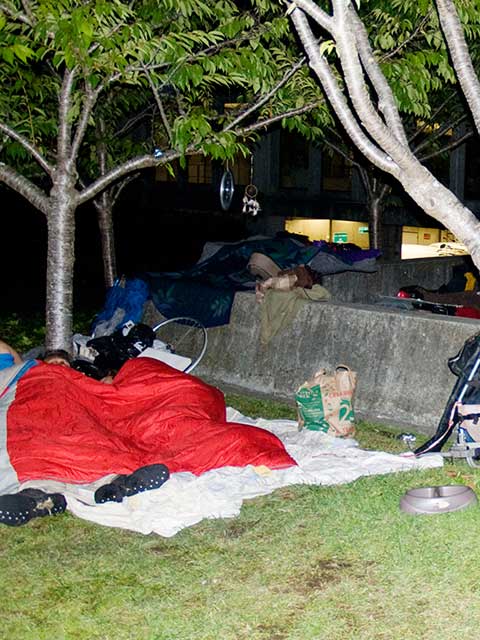 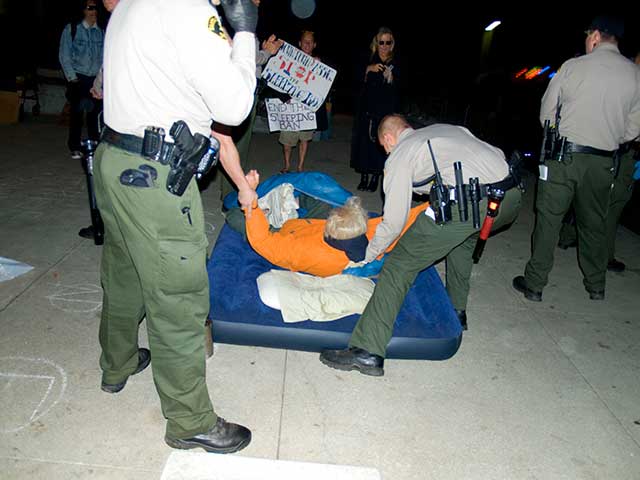 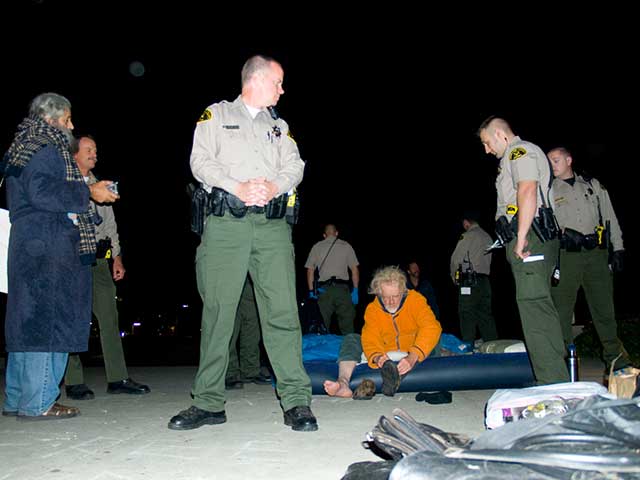 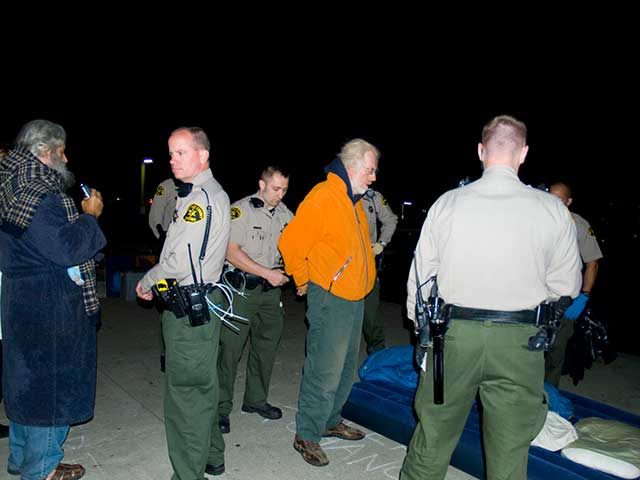 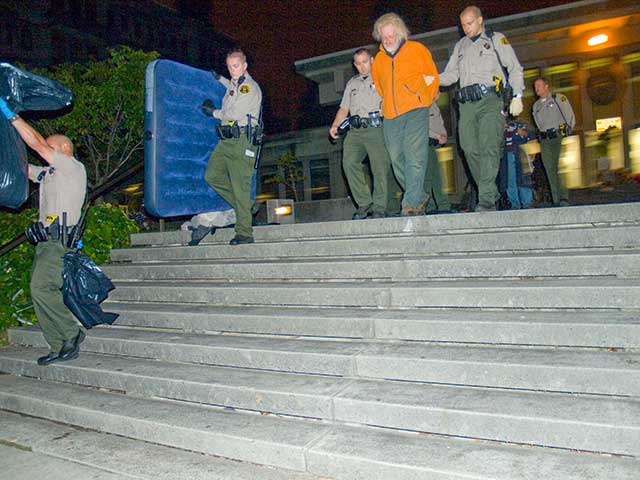 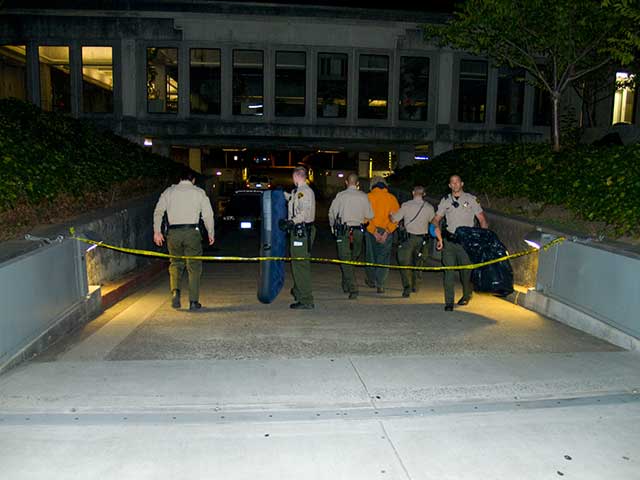 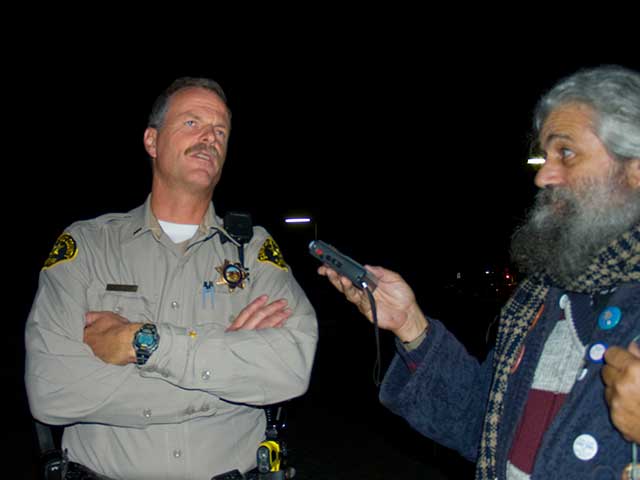 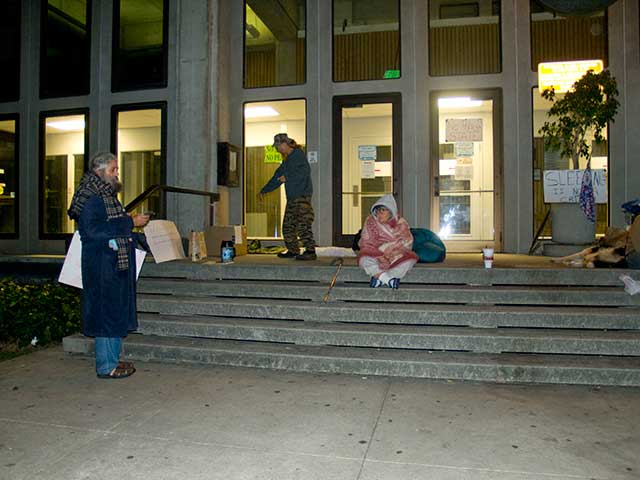 Collette defiantly, though desperately, sits next to her cane on the steps of the Santa Cruz County Courthouse in violation of the City's Blanket Ban, officially known as M.C. 6.36.010 section (b), which states that she is "camping" by wrapping herself with a blanket.

(b) Setting-up Bedding – 11 p.m. to 8:30 a.m. To establish or maintain outdoors or in, on or under any structure not intended for human occupancy, at any time between the hours of 11 p.m. to 8:30 a.m., a temporary or permanent place for sleeping, by setting up any bedding, sleeping bag, blanket, mattress, tent, hammock or other sleeping equipment in such a manner as to be immediately usable for sleeping purposes.
http://bradleystuart.net
§Chris Doyan
by ~Bradley Sunday Aug 8th, 2010 2:37 PM 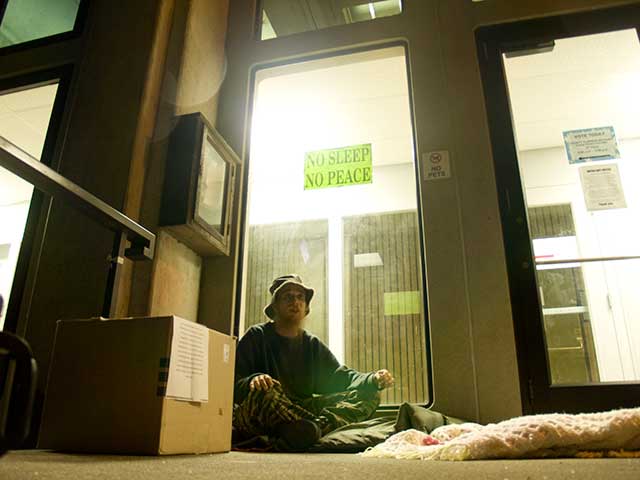 Chris Doyan was arrested the night before and said that he had not slept in 48 hours. He said that he was kept in the County Building tunnel, seen three photos, for four hours without access to a bathroom, and then spent three hours in a cold jail cell.
http://bradleystuart.net
§Sculpture Garden
by ~Bradley Sunday Aug 8th, 2010 2:37 PM 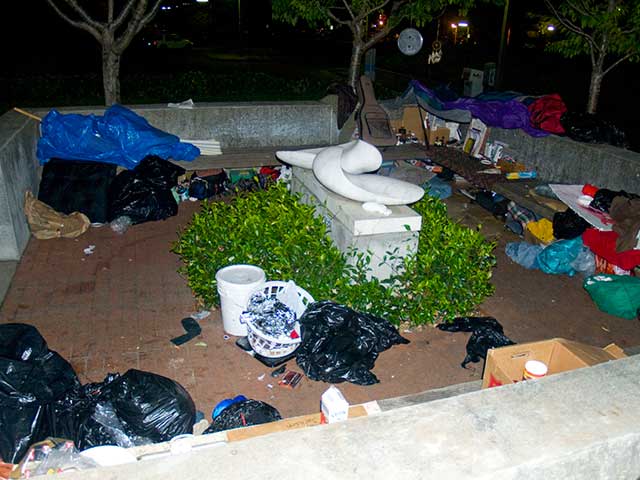 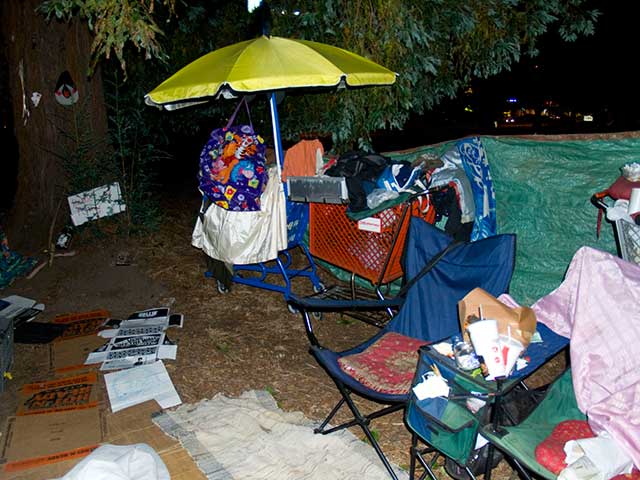 This camp, which had a lot of stuff, was under the redwoods closer to the intersection of Ocean and Water Streets.
http://bradleystuart.net
§
by ~Bradley Sunday Aug 8th, 2010 2:37 PM 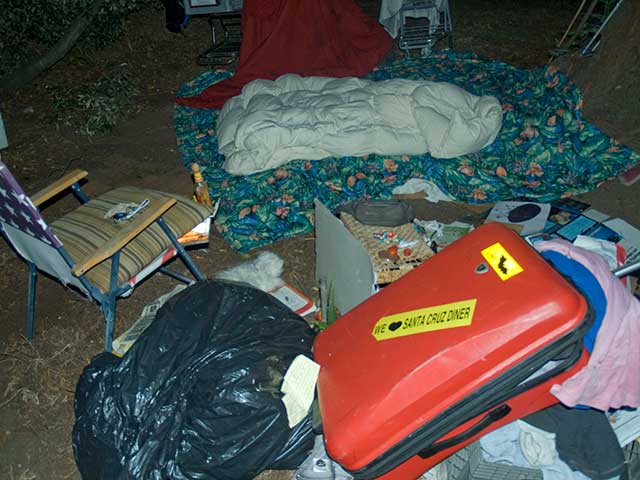 A half dozen sheriff's deputies picked through the items to determine if they were trash to be discarded, belongings to be saved and potentially claimed by their owners, or returnable, such as CVS shopping carts.
http://bradleystuart.net
§
by ~Bradley Sunday Aug 8th, 2010 2:37 PM 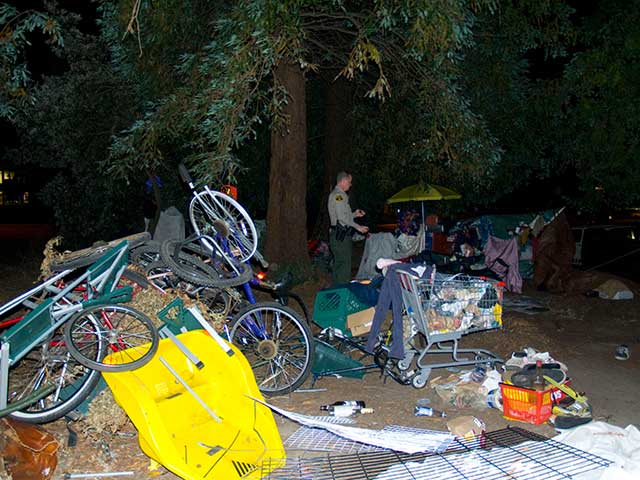 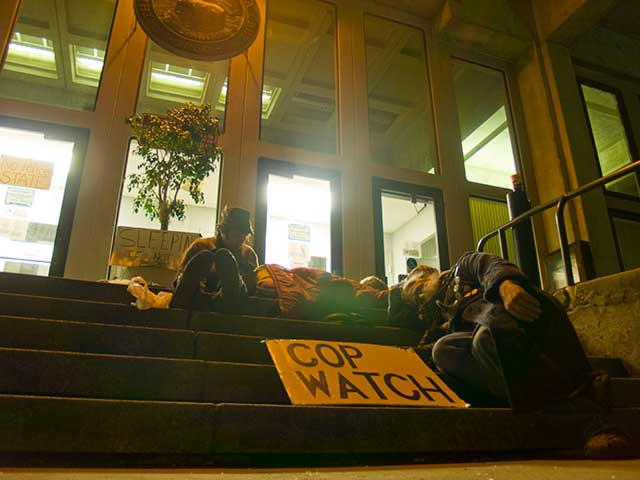 Robert Norse sleeping on the steps of the Santa Cruz County Courthouse in protest of laws making it illegal for homeless people to sleep at night in Santa Cruz.
http://bradleystuart.net
§Cart Delivery Service
by ~Bradley Sunday Aug 8th, 2010 2:37 PM 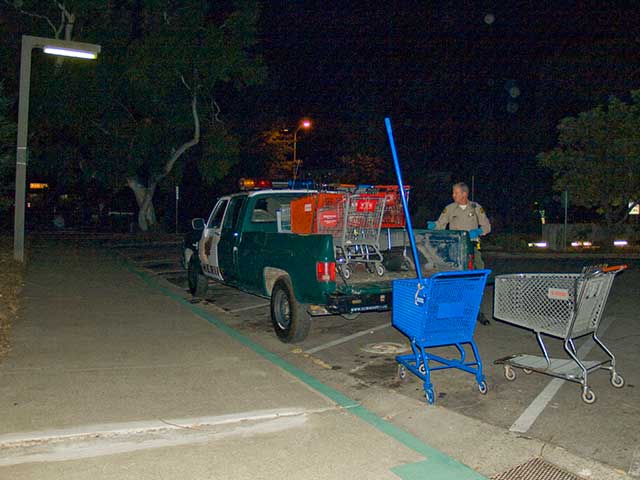 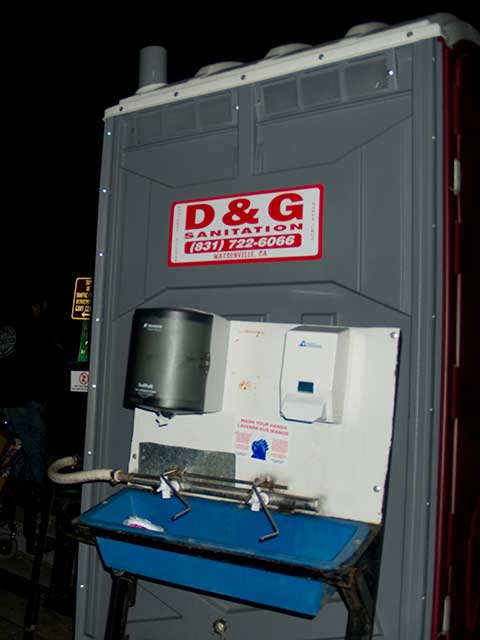 Public restrooms are few and far between in Santa Cruz. This porta-potty is one of the amenities by and for Santa Cruz Peace Camp 2010.
http://bradleystuart.net
Add Your Comments
LATEST COMMENTS ABOUT THIS ARTICLE
Listed below are the latest comments about this post.
These comments are submitted anonymously by website visitors.