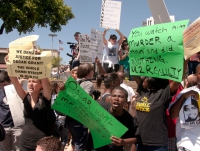 On July 19th, approximately 80 to 100 people rallied in the parking lot of the Walnut Creek courthouse in support of former BART police officer Johannes Mehserle. About 200 counter-protesters showed up to demonstrate for Oscar Grant and other victims of police brutality. The rally was prompted by the conviction of Mehserle of involuntary manslaughter in the New Year's Day 2009 shooting death of train rider Oscar Grant.

Demonstrators in support of Mehserle lined a wall near the courthouse and shouted at the counter-protesters below them. Oscar Grant supporters reenacted scenes of police brutality by lying on the ground with their arms clasped behind them, screaming, "Don't shoot me!" Both sides held up signs indicating their position and the pro-Mehserle group waved an American flag. One of the counter-demonstrator's signs read "Oscar will not come back in two years, why should Mehserle?", reflecting concern that Mehserle could receive what many consider to be an unjustly light sentence.

There were no arrests.

Full coverage of the Justice for Oscar Grant movement