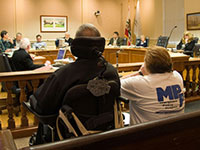 On Tuesday, March 9th, the Santa Cruz City Council voted 6-0 to support a recommendation from the city staff which bans the opening of an additional medical marijuana dispensary in Santa Cruz. This was the first reading of the vote and there will be a second vote in two weeks to finalize the ruling.

Under the new ordinance, Greenway Compassionate Relief and Santa Cruz Patients Collective (SCPC), the two existing medical marijuana dispensaries, will be permitted to operate a cultivation facility up to 3,000 square feet, which must comply with the Americans with Disabilities Act (ADA). The new ordinance specifically bans any new dispensaries from opening, and it also specifies that the entire city is off-limits for dispensaries, except for two industrial zones in the Westside and Harvey West area.