Add an Event
Newswire
Calendar
Features
Home
Donate
From the Open-Publishing Calendar
From the Open-Publishing Newswire
Indybay Feature
Publish to Newswire
Add an Event
Related Categories: Santa Cruz Indymedia | Drug War | Government & Elections | Health, Housing & Public Services | Police State & Prisons
Santa Cruz City Council Votes to Ban Additional Medical Marijuana Dispensaries
by ~Bradley (bradley [at] riseup.net)
Tuesday Mar 9th, 2010 6:57 PM
On Tuesday, March 9th, the Santa Cruz City Council voted 6-0 to support a recommendation from the city staff which bans the opening of an additional medical marijuana dispensary in Santa Cruz. This was the first reading of the vote and there will be a second vote in two weeks to finalize the ruling. 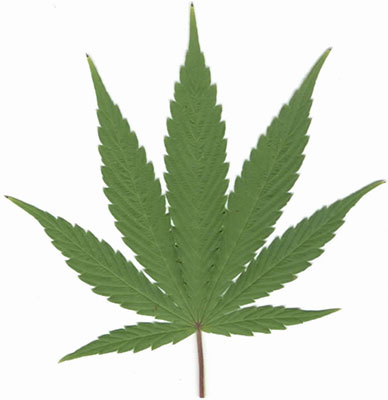 Tony Madrigal made a motion to allow for more time and community input before the first round of voting was done. The motion did not receive a second. The third applicant asked about his application fees being returned to him.

An amendment to the motion was made by Tony Madrigal, and passed 4-2, to allow for 3,000 square feet of grow space, which must be ADA compliant.

A motion was passed 6-0 to:
* Limit the number of dispensaries to two.
* Allow for 3,000 square feet of growing space to the two existing dispensaries
* Refund the fees already paid by the third applicant 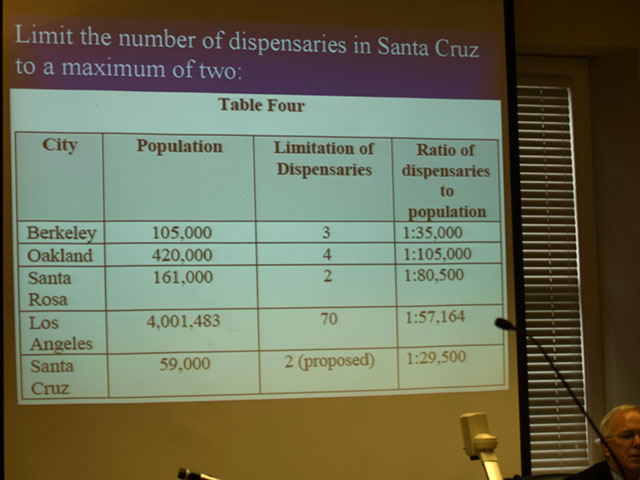 Staff for the City of Santa Cruz prepared a slideshow to advocate for limiting the number of medical marijuana dispensaries in Santa Cruz to the two existing dispensaries located in the industrial Harvey West district.
§600 foot setback
by ~Bradley Tuesday Mar 9th, 2010 10:27 PM 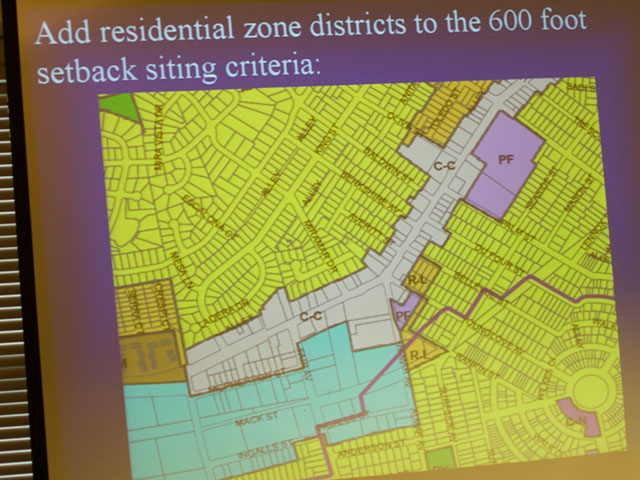 This is a map of the westside of Santa Cruz. An applicant for a third medical marijuana dispensary in Santa Cruz had proposed a location on Ingalls Street within the blue industrial area.
§Santa Cruz City Council and Staff
by ~Bradley Tuesday Mar 9th, 2010 10:38 PM 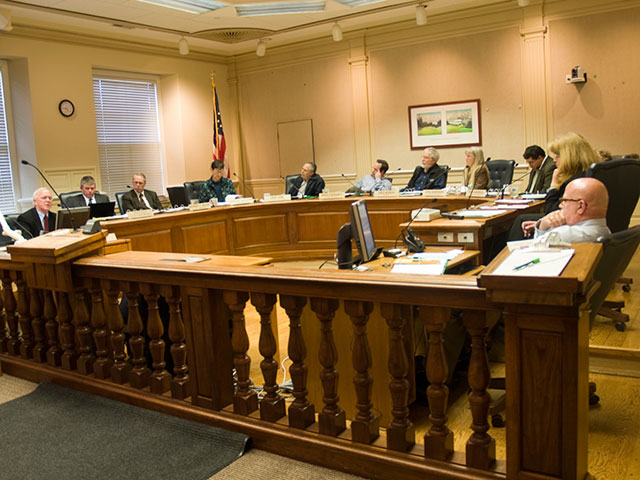 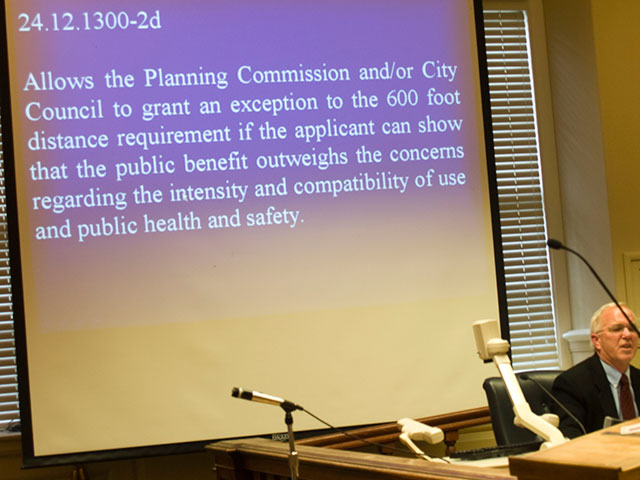 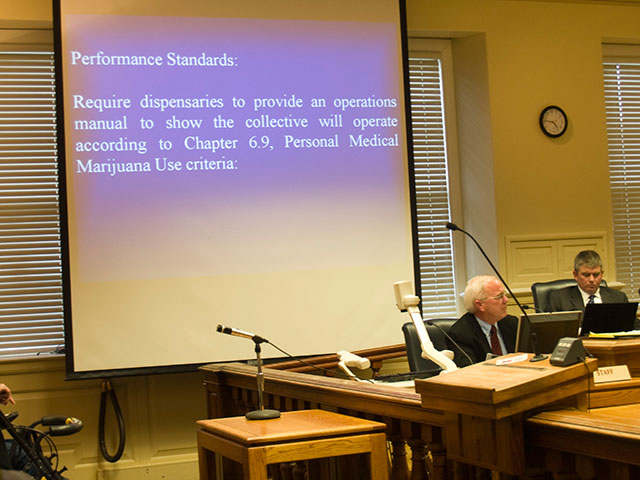 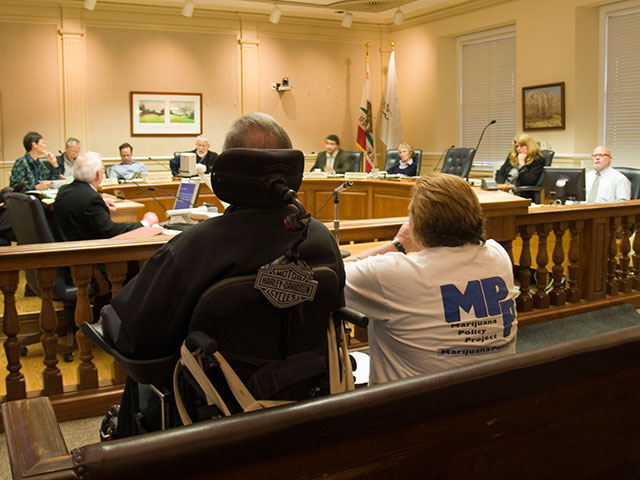 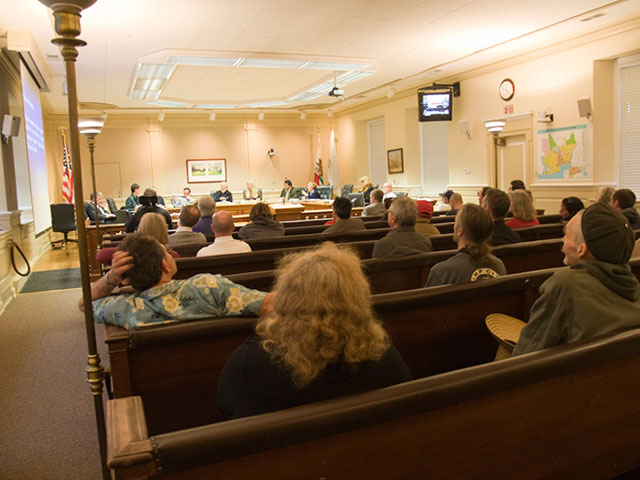 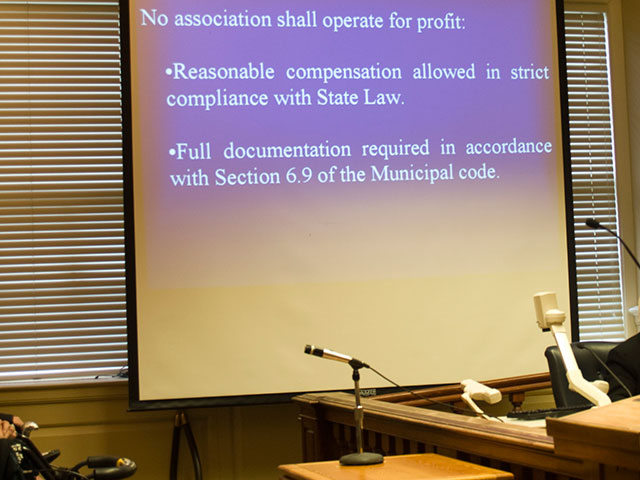 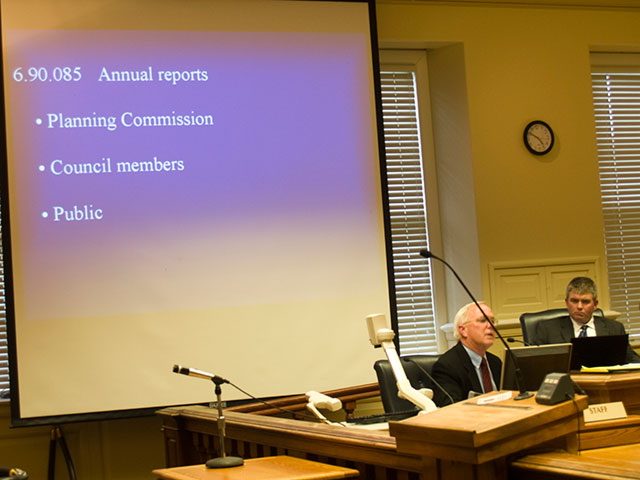 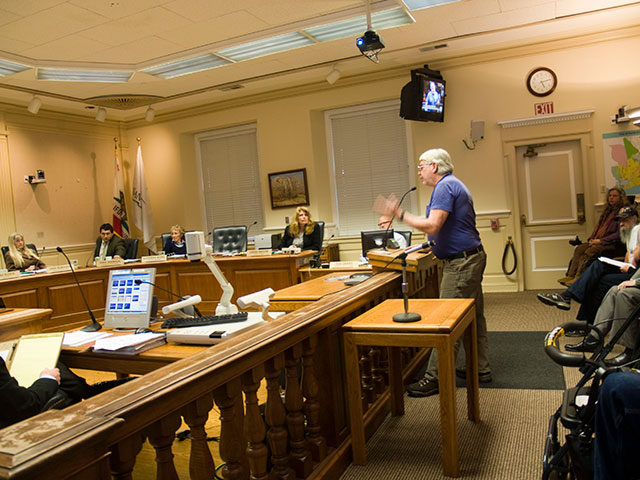 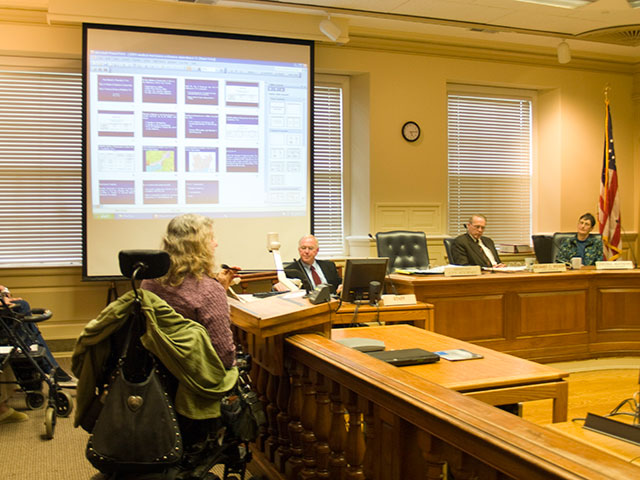 On September 5th, 2002, Suzanne Pfeil was asleep in her assisted living hospice, the Wo/Men's Alliance for Medical Marijuana (WAMM), when more than 20 armed federal agents stormed into the home and held an assault rifle to her head.

Pfeil suffers from post-polio syndrome and is paraplegic. The police officers ordered her to stand, despite the fact that her leg braces and crutches were in plain view. Pfeil tried to explain that she couldn't stand, but the agents handcuffed her behind her back and left her on the bed for several hours.

WAMM was, and is, well-known as a medical marijuana collective and hospice that strictly abides by California state laws regarding medical marijuana.
http://www.wamm.org
§Mike Corral, Co-founder of WAMM and Medical Marijuana Cultivation Expert
by ~Bradley Tuesday Mar 9th, 2010 11:02 PM 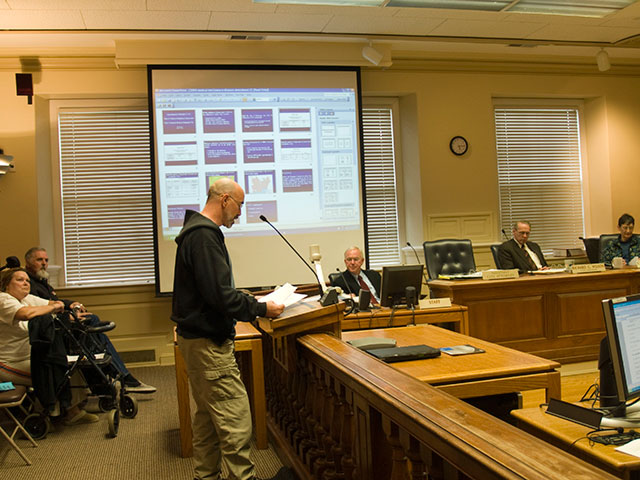 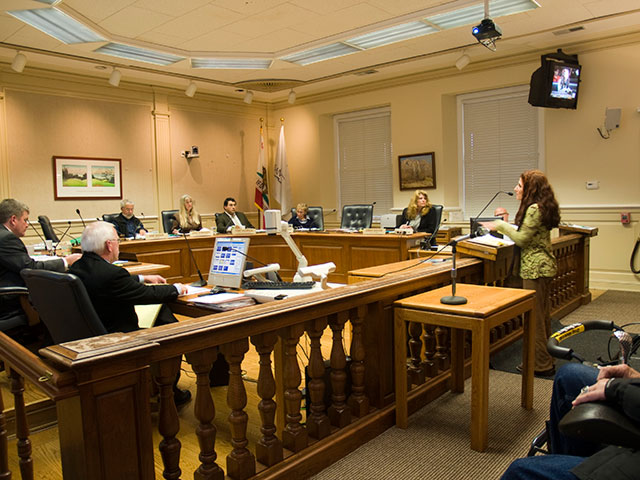 Valerie was a key-player in the crafting and passage of Proposition 215 (also known as the Compassionate Use Act of 1996), which allowed patients with a doctors recommendation to use marijuana medicinally. 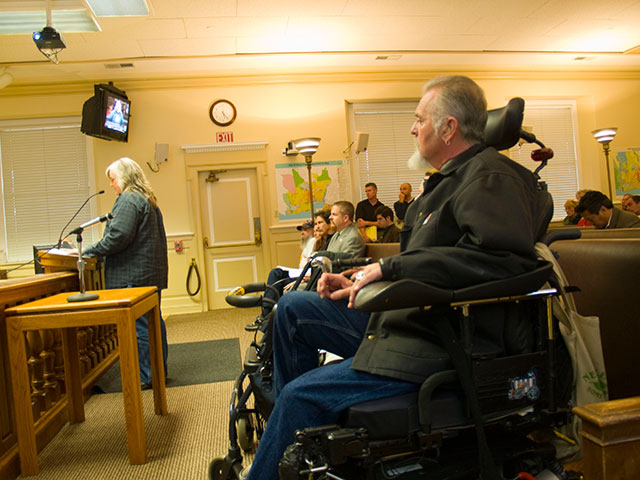 Greenway Compassionate Relief was Santa Cruz County's first medical cannabis dispensary and the first "licensed" dispensary in the state. Lisa raised a concern regarding section 6.9 of the proposed regulation. She feels that compliance records should be handled through a CPA, as opposed to the city. Lisa was also concerned about patient privacy and the extra cost burden maintaining more daily records, as proposed in the new ordinance. Lisa stated that Greenway is currently working towards, and hoping to become, a certified non-profit organization.

The man in the foreground has a sticker on his wheelchair that says: 'Pain Relief Is Not A Crime. WAMM'
§Third Applicant
by ~Bradley Tuesday Mar 9th, 2010 11:27 PM 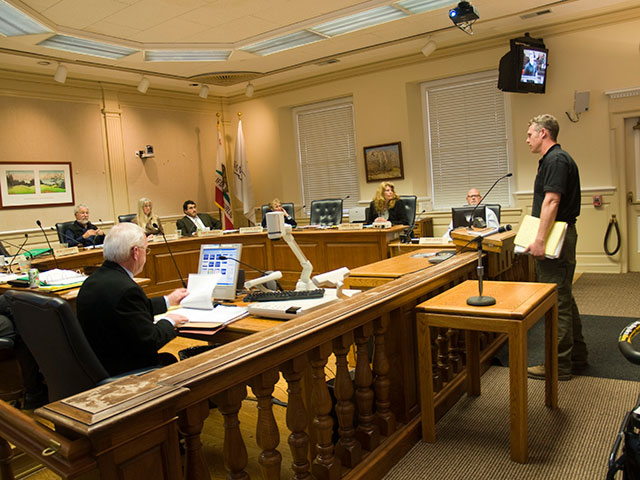 The third applicant wanted to agree to the new ordinance and be allowed to operate a model dispensary. He said that the new restrictions are a slap in the face to the medical marijuana community likened them to Jim Crowism. The applicant already invested a significant amount of time and money preparing to open a medical marijuana dispensary and said he was an upstanding community member.
§Kenny
by ~Bradley Tuesday Mar 9th, 2010 11:53 PM 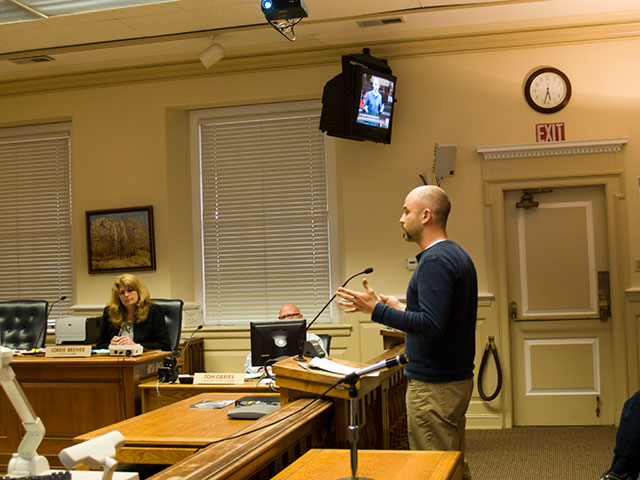 Kenny is a Santa Cruz westsider against the limitation to two medical marijuana dispensaries. He pointed out that in economics, this situation is considered an oligopoly.

From Wikipedia:
In Economics, an oligopoly is a market form in which a market or industry is dominated by a small number of sellers (oligopolists). Because there are few sellers, each oligopolist is likely to be aware of the actions of the others. The decisions of one firm influence, and are influenced by, the decisions of other firms. Strategic planning by oligopolists needs to take into account the likely responses of the other market participants. 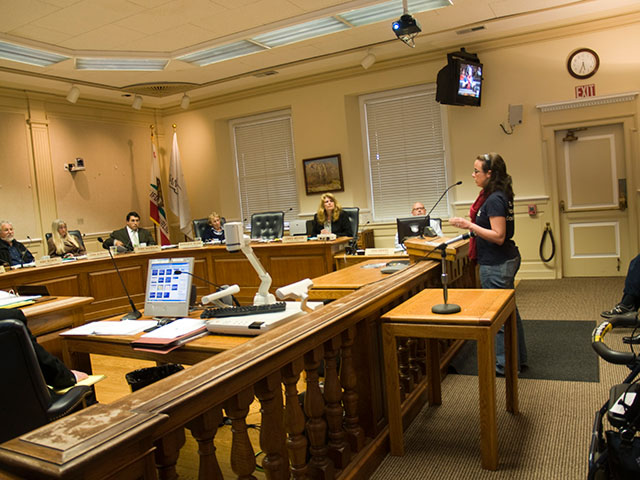 Analicia began by stating that she was not against medical marijuana, or even marijuana legalization. Then Analicia went on to present a ramble of facts she which seemed to be made up, inconsistent and contradictory. She finished by saying that the two existing dispensaries were plenty because 'you can stroll or walk to Harvey West.' 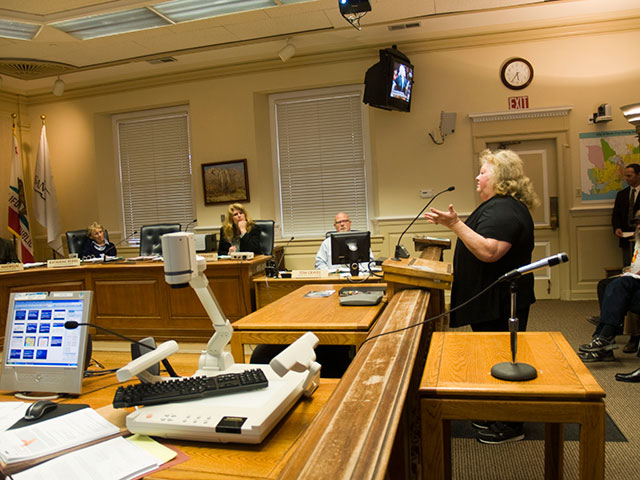 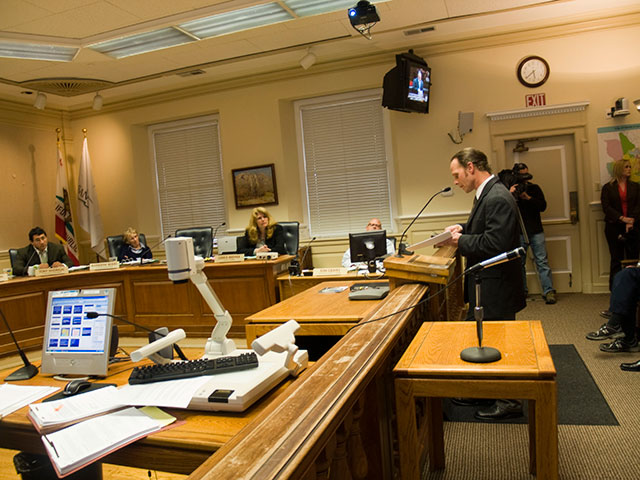 Ken said that he was there to serve patients and that he was not making a lot of money. He says that he and Greenway have been the victims of disinformation which he does not have the time to rebut.

Ken says that it has always been the goal of SCPC to provide the highest quality medicine at the lowest possible price. He says that things have changed a lot in a short amount of time, with 30 medical marijuana dispensaries recently opening in San Jose. Ken said that laxer polices and enforcement have led to an overall drop in market prices, and that he's been able to pass the savings on to the patients (or customers) he serves.
§Dexter
by ~Bradley Wednesday Mar 10th, 2010 12:41 AM 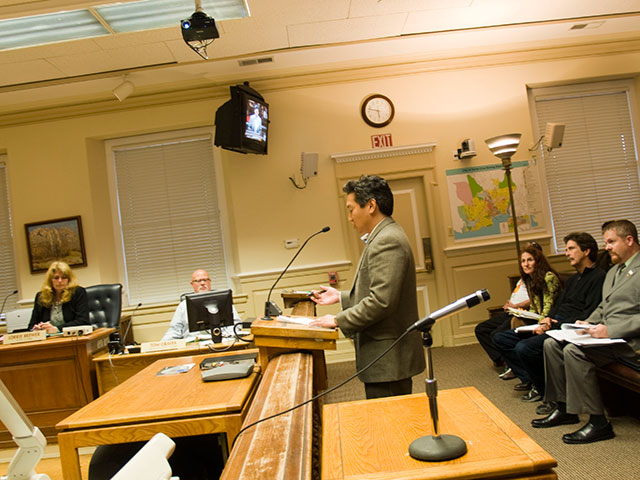 While Dexter stood next in line to speak, he teased, or perhaps 'joked with' Michael Tomasi by blowing a kiss at him and saying "I love you man." Then Dexter began his reefer madness rant by saying, "I was not expecting to speak."

At the January 26 city council meeting, Dexter, a leader of the group Take Back Santa Cruz, railed against the ravages that a third medical marijuana dispensary would cause in Santa Cruz.

And again with this opportunity, Dexter gave his best shot at stringing together sentences, that were for the most part incomprehensible, with any scary sounding words he could come up with.
§Michael Tomasi
by ~Bradley Wednesday Mar 10th, 2010 12:46 AM 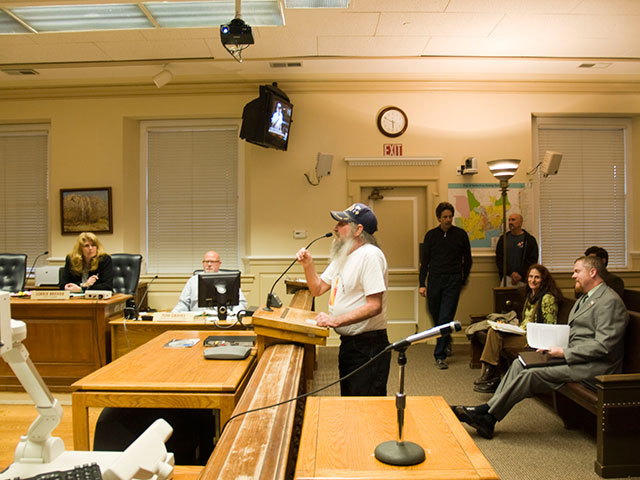 Michael Tomasi began by clarifying that he is not a supporter of medical marijuana because marijuana should legal for everyone. If this was thirty years ago, he said he would be growing pot and making a profit. Mr. Tomasi said that Valerie Corral and other people that cultivate and distribute marijuana work very hard and they deserve to be making a profit. Mr. Tomasi said that he does not care about their marijuana laws and that he smokes pot everyday on the steps of the police station.
§Michael Corral
by ~Bradley Wednesday Mar 10th, 2010 12:52 AM 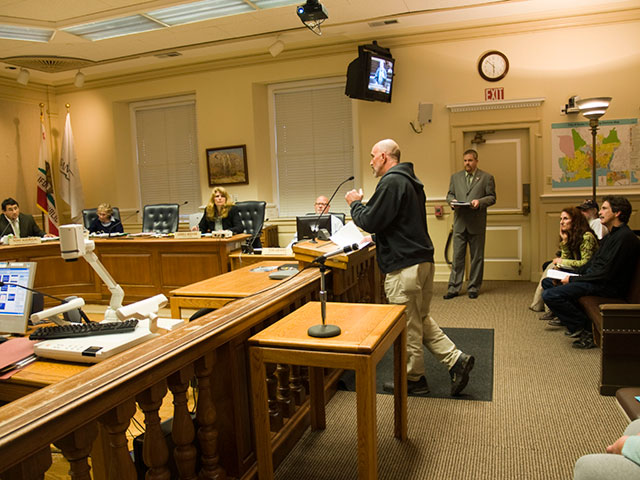 Michael Corral, an expert witness in medical marijuana cases, spoke a second time in response to a question from Tony Madrigal. Mr. Corral wanted to offer a source for further information in regards to expected yield per square foot of cultivation area. He suggested a 1992 study done by the US Drug Enforcement Administration (DEA) that takes into account stem and leaf when determining the weight of consumable marijuana bud. 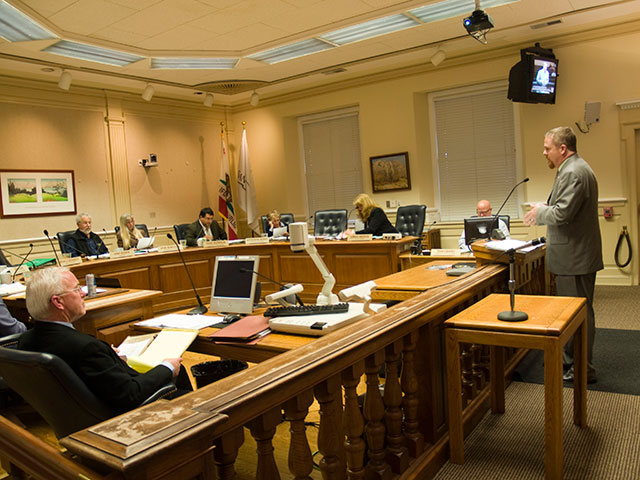 Scott says, as a former policeman, he used to be against the use of marijuana, but now sees the medicinal benefits it provides. He also states that Greenway is an outstanding organization.
§Gloria
by ~Bradley Wednesday Mar 10th, 2010 1:04 AM 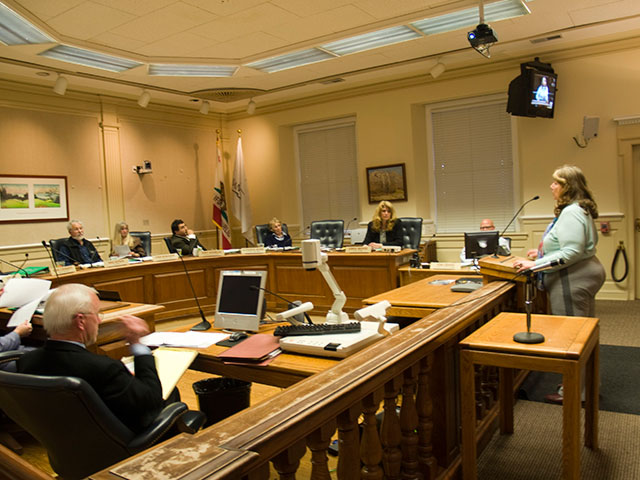 Gloria is now, at the recommendation of her doctor, a qualified medical marijuana patient. Her doctor recommended marijuana to get her off of three pharmaceutical drugs, and it worked. However, Gloria says she was outraged by the high prices charged for medical marijuana. Fortunately, Gloria has been accepted as a member of WAMM and she is able to obtain her medicine at a more affordable rate in a dignified manner. Gloria said that she is against an ordinance that may place restrictions on any current or future activity by WAMM.
Add Your Comments
LATEST COMMENTS ABOUT THIS ARTICLE
Listed below are the latest comments about this post.
These comments are submitted anonymously by website visitors.