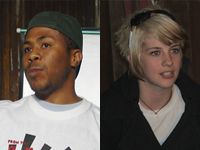 JR Valrey and Holly Works, the last two of the Oakland 100 — those arrested during the rebellions that followed the police murder of Oscar Grant last year — must raise legal defense funds for their imminent trials. JR’s trial starts Monday, February 22nd, and Holly’s starts Monday, April 5th. Both trials will be held at the René C. Davidson Alameda County Superior Courthouse in Oakland. Supporters are calling out to all who are able to attend the trials. Each trial is expected to last a few days.

The Oakland 100 Support Committee has released a 20-minute video to raise awareness about the upcoming cases and the need for support:

Second Hearing in LA for the Murder of Oscar Grant Video |

Community Speaks Out Against BART |

O100 Benefit with Cynthia McKinney on Anniversary of Mehserle's Arrest, 1/13/10: photos and audio |