And so it goes. Yesterday's report by KTVU was the final straw and Oscar Grant family attorney John Burris called a press conference today to confront the attacks on Oscar Grant's family and friends by BART via anonymous sources. [full video below] 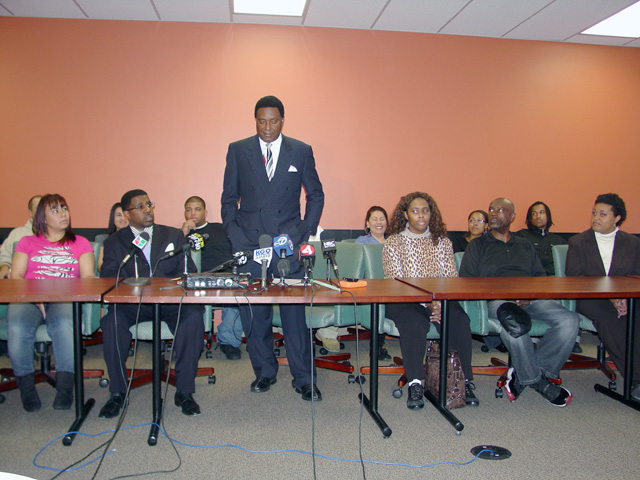 Since triumphantly announcing on January 27th that a $1.5 million settlement had been reached with Sophina Mesa, the mother of Oscar Grant's young daughter Tatiana, BART has busied itself smearing Oscar Grant's friends who were on the Fruitvale station platform with him when Johannes Mehserle murdered him. Together Oscar Grant and his friends were physically abused, threatened, taunted, and cursed at by BART officers Tony Pirone and Marysol Domenici (before Mehserle was even present on the platform). After Oscar Grant was shot in the back and killed, his five friends with him at the time were wrongfully detained and handcuffed for up to six hours. Yet BART attorney Dale Allen has been making statements to the corporate media that the agency will "vigorously fight [Oscar's friend's civil suit] based on their contributing actions to the tragic accident," further attempting to publicly discredit his friends with irrelevant claims of "significant police contacts" in the past. BART has long blamed Oscar Grant for his own murder, but now they are turning up the heat on his friends too, blaming everyone but Mehserle, Pirone, Domenici and their own deeply inept, reckless, and corrupt police department for the murder.

The settlement already had brought enough consternation to Oscar Grant's family, as well as community activists committed to holding police accountable for their violence against unarmed citizens. BART was so eager to make the announcement that they did so before others parties to suits against BART even had reasonable time to process it with family attorney John Burris. Community activists were taken aback by the relatively paltry amount for Oscar Grant's daughter, who will live nearly her entire life without her father. BART structured the settlement to be paid entirely to Tatiana, with nothing for her mother, breaking payment up into pieces so that BART would not even make good on the full amount until Tatiana is an adult. Adding insult to injury, with word of the settlement out, the corporate media sought comment from Mehserle's defense attorney Michael Rains, who used the opportunity to soften his client's public persona by claiming that Mehserle was "grateful" that BART would be paying money to Tatiana, even though Mehserle himself has refused to be held accountable in any way. Of course, Rains ran with it and reiterated Mehserle's defense that the shooting was accidental, but he also implied that BART not only supports Mehserle in principle but in actuality (KTVU: Rains said BART officials agreed with him that the shooting was an accident and if they thought he had intentionally killed Grant "they would have had no duty to provide a defense for him.") Is BART providing funding, legal services, or merely back room exchanges of information for the benefit of Mehserle's defense?

It certainly appears that BART and Rains are working together based on the reports that have appeared recently in the corporate media. Which brings us to KTVU's problematic report from yesterday: Depositions By Grant’s Friends Reducing BART Liability. The piece purportedly builds a case against Oscar Grant's mother and friends which is beneficial to both BART in resisting the civil suits and Mehserle in his defense against murder charges in Los Angeles Superior Court. But other than quoting opinions from Golden Gate University law Professor Myron Moskovitz and citing a police report of unknown integrity, the entire case it makes is based on anonymous sources. Somebody (or -bodies) is leaking confidential information. It certainly would not be the first time that information has been leaked (with KTVU again amplifying the message) — despite the gag order in the murder trial that has been in effect on the case since January 2009 — but this is the first time in memory that anonymous sources have been quoted in the media about private discussions related to the civil suits.

This time anonymous sources, obviously with access to privileged information regarding civil suit negotiations, asserted that "BART's potential liability costs were going down" due to statements and depositions Oscar Grant's friends have given. BART appears to be more than willing to violate a mutually agreed upon protective order guiding negotiations and divulge information it deems damaging to the plaintiffs. And this just a mere few weeks after BART Board Director Carole Ward Allen sanctimoniously feigned sympathy and presented Oscar Grant's family with flowers on the one-year anniversary of his death.

Enough was enough, and John Burris called an "emergency" press conference today to refute in the light of day what he said was misinformation and falsehoods, and to scold BART for the bad faith it was showing by publicly attempting to "diminish" Oscar Grant's friends and family while at the same time taking part in ongoing negotiations over the civil suits. Unified beside and behind Burris were Oscar Grant's mother Wanda Johnson, Oscar's uncle Cephus Johnson, Sophina Mesa, Sophina's mother Rosa, Sophina's sister Lita Gomez, three of Oscar Grant's friends, Jack Bryson, father of Oscar Grant friend Jackie Bryson, and other family and legal representatives.

Burris reminded BART not to get ahead of itself as the settlement for Tatiana is not final, their recent actions perhaps cratering the deal. He said he was angry and noted that he was not afraid to take the civil cases to trial because the civil rights violations perpetrated by BART police were clear, and they were recorded by multiple videocameras. Pointedly, Burris cited the U.S. Supreme Court Dred Scott decision that "a black man has no rights that a white man needs to respect" and declared that BART's actions suggest its position is that Oscar Grant's friends have no rights that BART needs to respect. He also reminds the assembled media that Tony Pirone and Marysol Domenici used their tasers in ways that the Ninth Circuit Court ruled unconstitutional in late December. Additionally, Tony Pirone assaulted Oscar Grant and one of his friends. After the shooting, there was no more concern for Oscar Grant's friends when they were held for hours in handcuffs without probable cause. [As a sidenote, while Oscar's friends were questioned and recorded by BART police on January 1st, 2009, recordings now being cited by anonymous sources via KTVU in defense of Mehserle, Mehserle himself was never once even questioned by BART PD internal affairs nor given a drug test as was supposedly BART police policy.] Burris insists that he would fight "until the end of time" against BART's implication that African American men with prior criminal conduct no longer have civil rights, can be treated disrepectfully, and placed in a jeopardizing position.

Burris then discusses the violation of agreements of confidentiality signed by BART and all parties involved in negotiations. He questions BART's ulterior motives in leaks that Sophina and Tatiana "left money on the table" and settled for less than earlier offers. He clearly blames BART for the ethical breaches, regardless of if they came from their lawyers or others within the agency.

Finally, Burris questions the assertions coming from BART that Oscar Grant's friends have made statements that are beneficial to Mehserle's defense. He reminds everyone that whatever they may have said at the time was based on fast-moving events and the shock of having witnessed their friend be shot in the back by BART police officer Mehserle -- the multiple video recordings of the incident are a much more accurate portrayal of what happened. He asks if such statements are intended endanger Oscar's friends by putting a "snitch jacket" on them. Burris said that the young men have been threatened and called snitches as a result of BART's statements about private depositions.

Burris takes questions at the end of the press conference. He suggests that BART's outreach to the community to date may have all been disingenuous given their recent actions. Rita Williams of KTVU attempts to defend the responsibility of her reporting with her questioning.
http://indybay.org/oscargrant
§Full video of press conference
by dave id Friday Feb 5th, 2010 10:10 PM
Copy the code below to embed this movie into a web page:
Download Video (81.5MB) | Embed Video
(video 23:07)
http://indybay.org/oscargrant
§Burris' printed press statement
by dave id Wednesday Feb 10th, 2010 10:28 PM 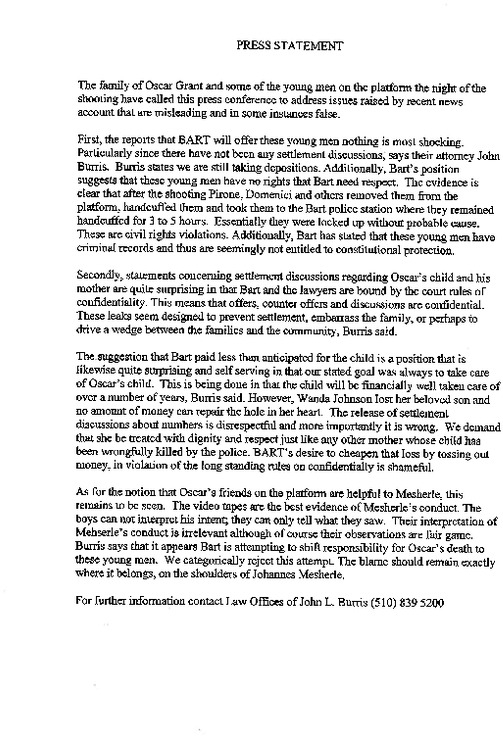 Download PDF (45.0KB)
(1-page PDF)
http://indybay.org/oscargrant
Add Your Comments
LATEST COMMENTS ABOUT THIS ARTICLE
Listed below are the latest comments about this post.
These comments are submitted anonymously by website visitors.