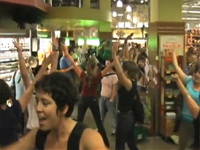 Feeling conservatives had been winning the limelight in the debate over healthcare reform through a serious of high profile stunts and remarks, advocates of reform decided to steal back some of the media's attention, forming a flash mob Sept. 26 in an Oakland Whole Foods in response to the CEO's recent Op-Ed in the Wall Street Journal in which he opposed reform.

At 6:11 p.m., 35 protesters, who had been fake-shopping the aisles of the green foods giant, convened at the middle of the store, and launched into singing "Hey Mackey, you're a swine," some shouting it into a megaphone and others dancing a choreographed jig as a live orchestra blared from all directions.

The market's security questioned the group and eventually police were called. No complaints have been filed. Store security allowed the performance to unfold for several minutes in the store, and again didn't interfere as the protesters filed out through the entrance to stage a continued demonstration on the sidewalk.