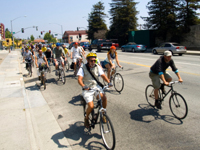 The City of Santa Cruz Public Works Department and Police Chief Howard Skerry have expressed opposition to proposals that would improve conditions for cyclists along the Mission/King corridor, according to People Power, a local bicycle advocacy organization.

A memorial bike ride took place on August 16th. Cyclists met at 11:30am at Bayview Elementary School (near the Corner of Mission and Bay) and rode on Mission and King Streets, in group style, while respecting and being considerate of other street users.