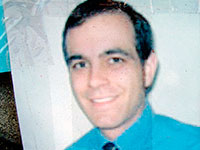 On August 7th, John Myslin, a history teacher and advisor at Pacific Collegiate School, was run over and killed by a semi-truck at the intersection of Bay Street and Mission Street (Highway 1) in Santa Cruz while riding his bicycle.

In response to this tragedy, Bicicleta Bandito published a call for an emergency rally, vigil and bike mass, "For anyone who rides, the time to express our grief and outrage is now. Another life has been cut short by a machine that is inherently detrimental to earth and its creations. Join us for an emergency bike mass on the corner of Bay/Mission - bring flowers, candles, signs, whatever you need to express your feelings on the matter."

Many people came to the vigil and paid respects, some held signs, some brought flowers. A human-powered generator, which creates electricity by attaching a bike, was set up to power a small amplifier with microphone. Speakers addressed the importance of biking to be healthier, reduce our dependence on oil, and to create more peace in our communities by eliminating the excess noise created by motor vehicles. Vigil attendees also participated in the creation of a 'ghost bike.' Cans of white spray paint were passed around and people took turns painting an old bike white, to create a piece of art to memorial the fallen cyclist.