Add an Event
Newswire
Calendar
Features
Home
Donate
From the Open-Publishing Calendar
From the Open-Publishing Newswire
Indybay Feature
Publish to Newswire
Add an Event
Related Categories: Santa Cruz Indymedia | Health, Housing & Public Services
In Loving Memory of Mr. Myslin
by ~Bradley (bradley [at] riseup.net)
Thursday Aug 9th, 2007 7:51 PM
On August 9th, I cautiously rode my bicycle to the intersection of Bay and Mission Streets. I was at this intersection two days ago for a memorial to John Myslin, however those of us there were unaware of his identity at that time. We now know that Mr. Myslin was loved by his students at Pacific Collegiate School in Santa Cruz where he was a devoted teacher of history, his favorite subject. John Myslin's younger brother Robert commented online that he will remember John as "a teacher, a brother, and a best friend." 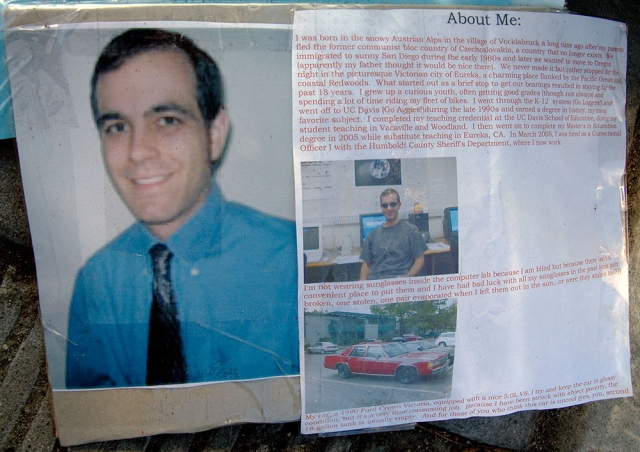 original image (1000x707)
On August 7th, John Myslin, a history teacher and advisor at Pacific Collegiate School (PCS), was run over and killed by a semi-truck at the intersection of Bay Street and Mission Street (Highway 1) in Santa Cruz while riding his bicycle. Community members held a vigil that evening for someone whose identity was unknown to them. Students at PCS and more community members soon learned that Mr. Myslin had passed away and held a memorial vigil on the evening of August 8th, adding flowers to the intersection of Bay and Mission along with candles and loving messages. One of the items left at the memorial was a collection of photographs and an autobiography which I have transcribed below.

I was born in the snowy Austrian Alps in the village of Vocklabruck a long time ago after my parents fled to the former communist bloc country of Czechoslovakia, a country that no longer exists. We immigrated to sunny San Diego during the early 1980s and later we move to Oregon (apparently my father thought it would be nice there). We never made it but rather stopped for the night in picturesque Victorian city of Eureka, a charming place flanked by the Pacific Ocean and coastal redwoods. What started out as a brief stop to get our bearings resulted in staying for the past 18 years. I grew up a curious youth, often getting good grades (though not always) and spending a lot of time riding my fleet of bikes. I went through the K-12 system (Go Loggers!) and went off to UC Davis (Go Aggies!) during the late 1990s and earned a degree in history, my most favorite subject. I completed my teaching credential at the UC Davis School of Education, do my student teaching in Vacaville and Woodland. I then went on to complete my Master's in Education degree in 2005 while substitute teaching in Eureka, CA. In March 2005, I was hired as a Correctional Officer with the Humboldt County Sheriff's Department, where I now work.

I'm not wearing sunglasses inside the computer lab because I am blind but becasue there isn't a convenient place to put them and I have had bad luck with all my sunglasses in the past (one pair broken, one stolen, one pair evaporated when I left them out in the sun... or were they stolen too??)

My car, a 1990 Ford Crown Victoria, equipped with a nice 5.0L V8. I am trying and keep the car in glossy condition, but it's a very time consuming job. Because I have been struck with abject poverty, the 18-gallon tank is usually empty. And for those of you who think this car is uncool (yes you, second
§Mr. Myslin, We Will Remember You
by ~Bradley Thursday Aug 9th, 2007 7:51 PM 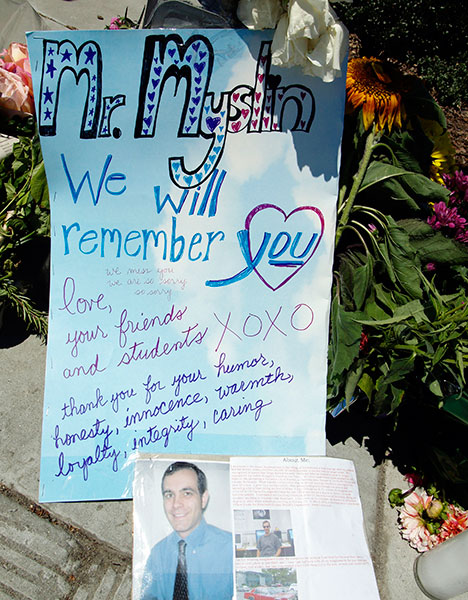 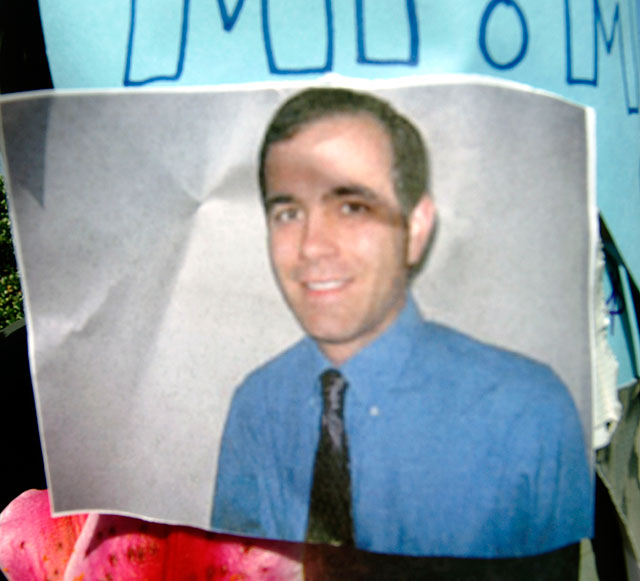 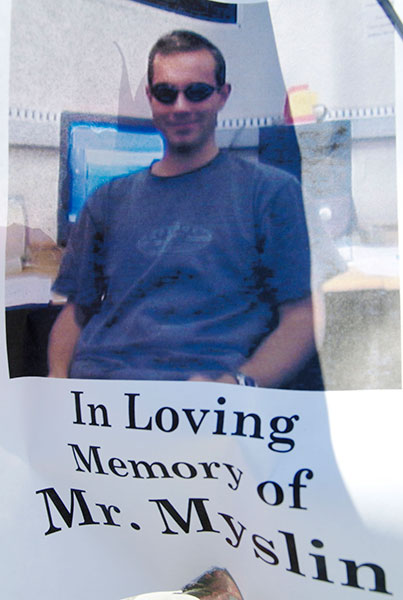 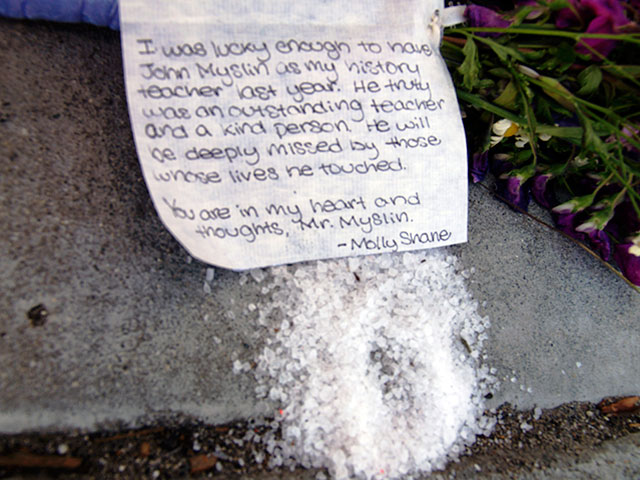 I was lucky enough to have John Myslin as my history teacher last year. He truly was an outstanding teacher and a kind person. He will be deeply missed by those whose lives he touched.

You are in my heart and thoughts, Mr. Myslin.
- Molly S
§A totally dedicated and amusing teacher
by ~Bradley Thursday Aug 9th, 2007 7:51 PM 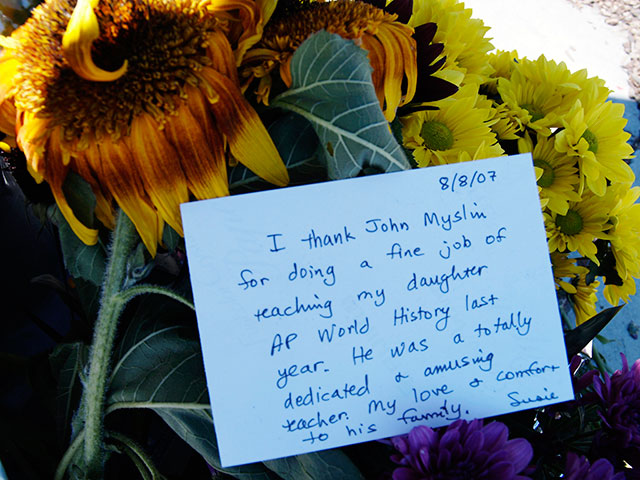 I thank John Myslin for doing a fine job of teaching my daughter AP World History last year. He was a totally dedicated and amusing teacher: my love and comfort to his family. Susie
§Bicyle Love
by ~Bradley Thursday Aug 9th, 2007 7:51 PM 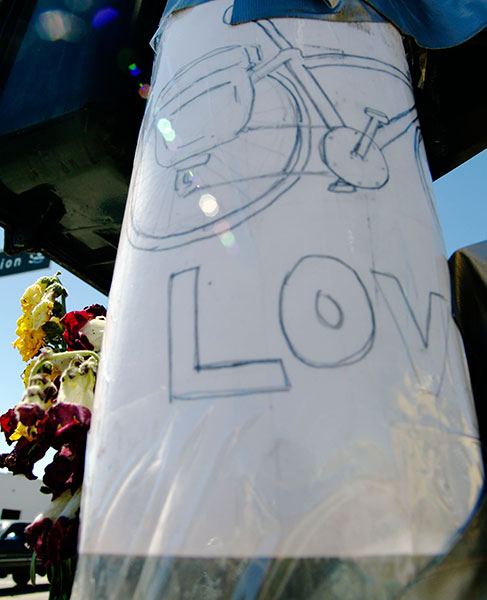 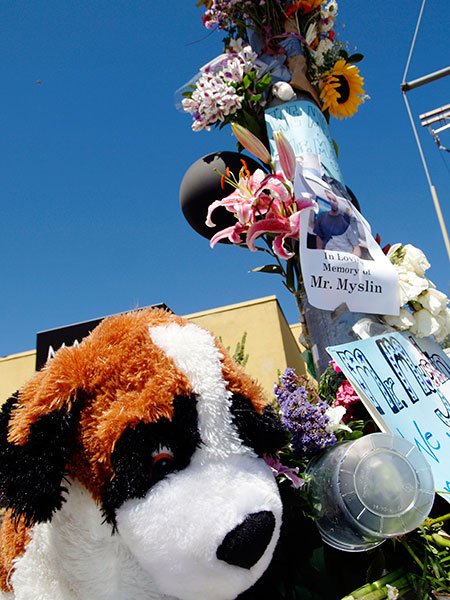 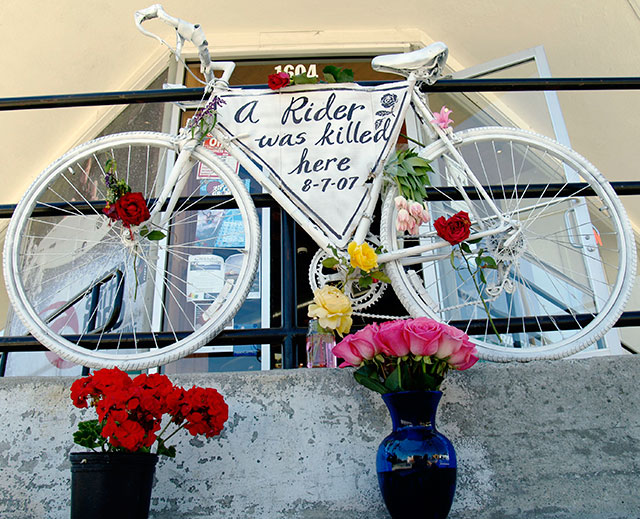 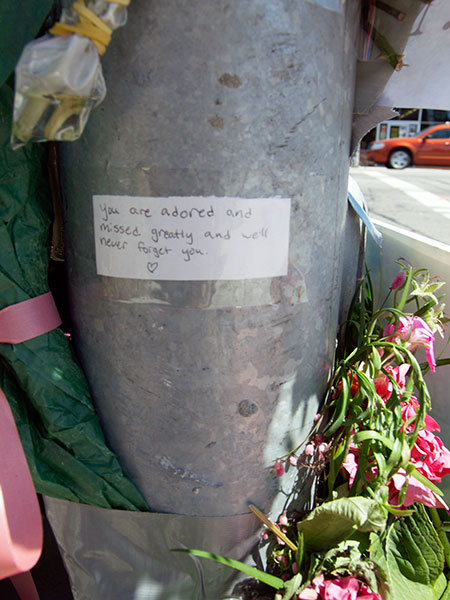 You are adored and missed greatly and we'll never forget you.
§Ride In Peace
by ~Bradley Thursday Aug 9th, 2007 7:51 PM 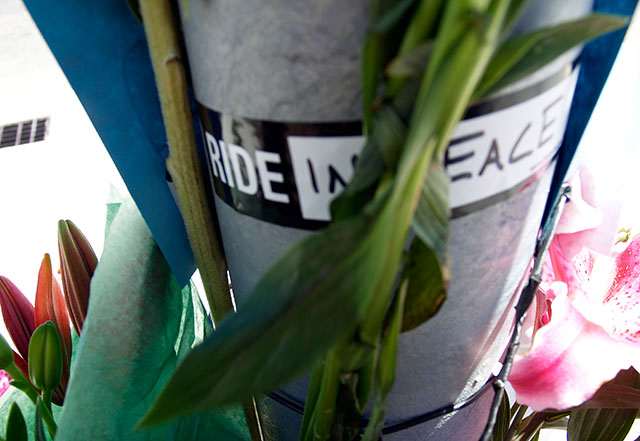 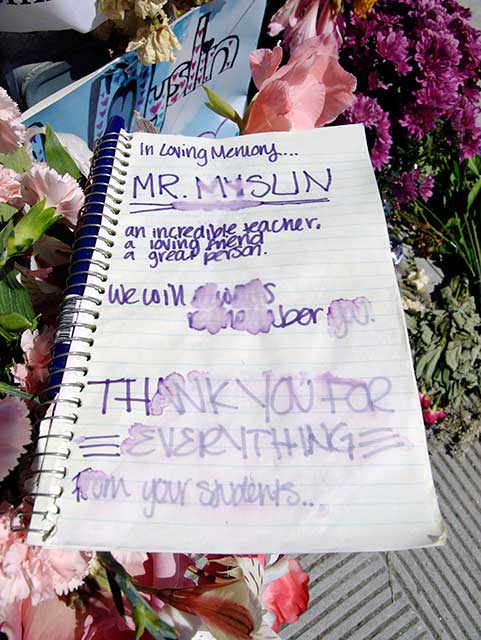 I returned to Mission and Bay on August 13th and found that Mr. Myslin's students started a memorial book. The students wrote memorials in the book and left a purple marker for other people to leave messages as well.
§Diana
by ~Bradley Wednesday Aug 15th, 2007 4:36 PM 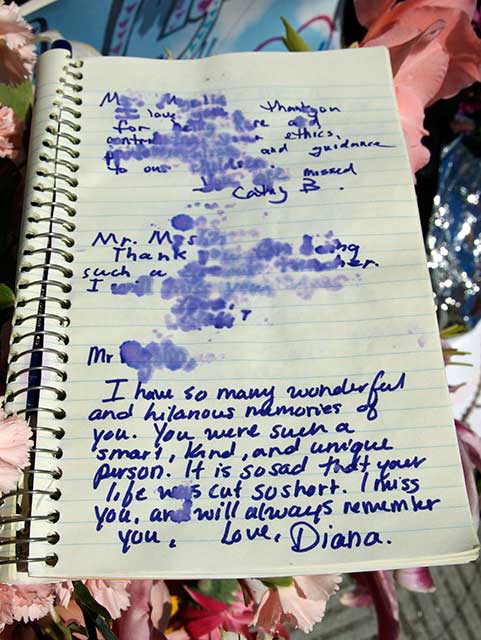 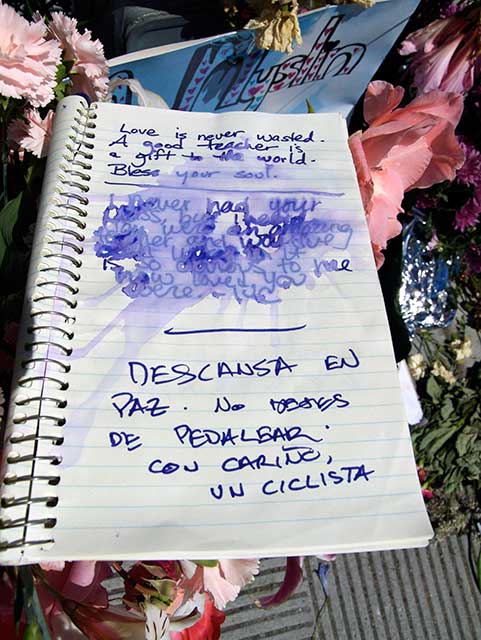 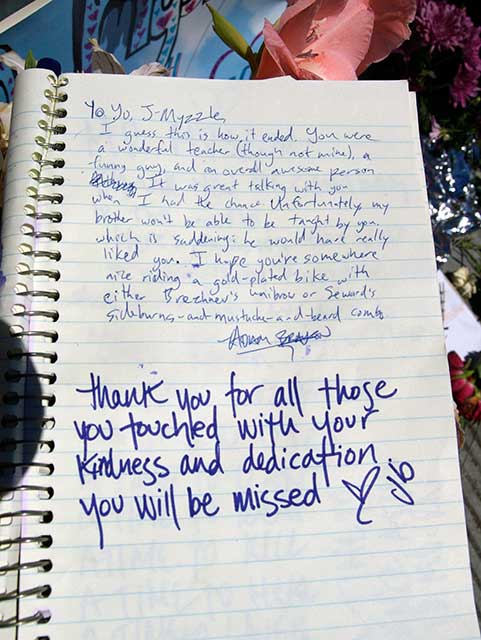 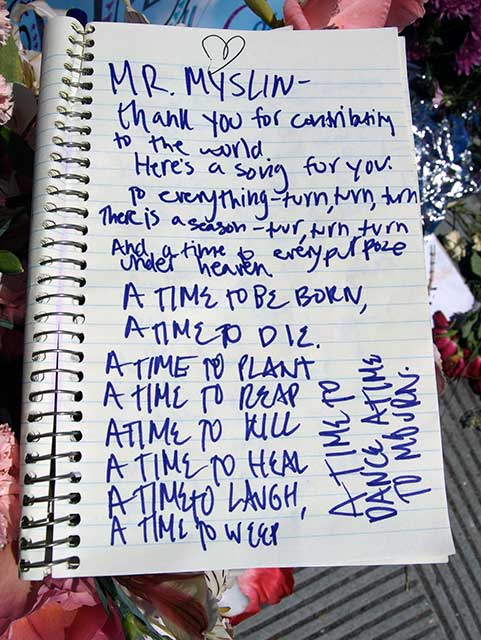 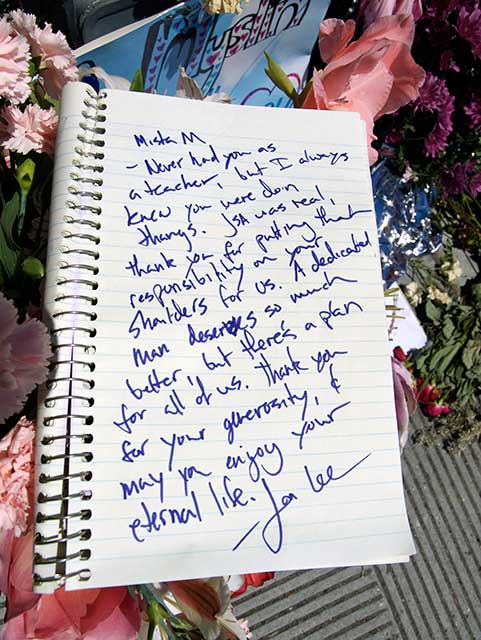 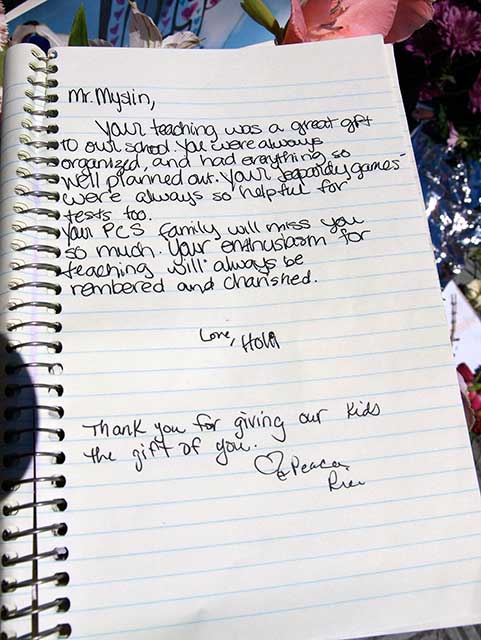 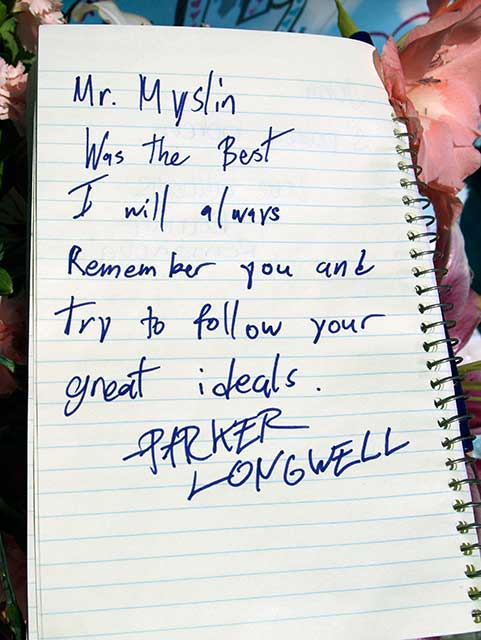 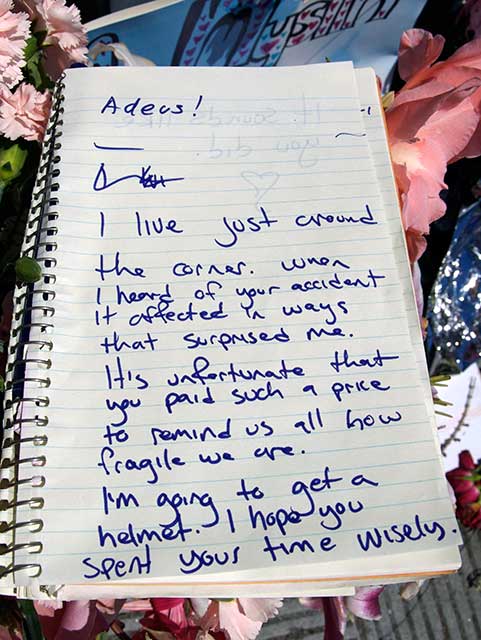 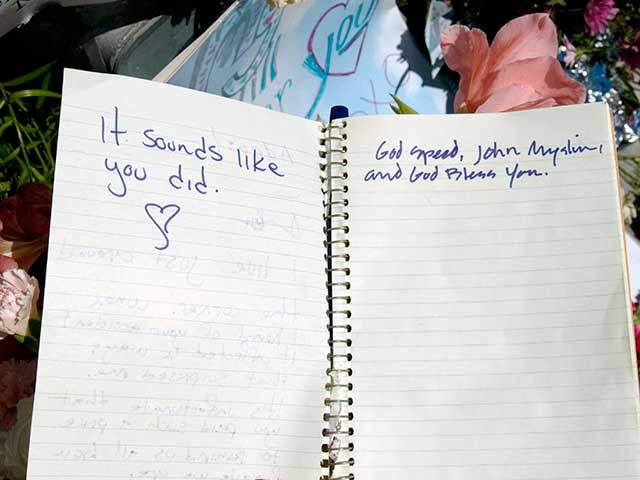 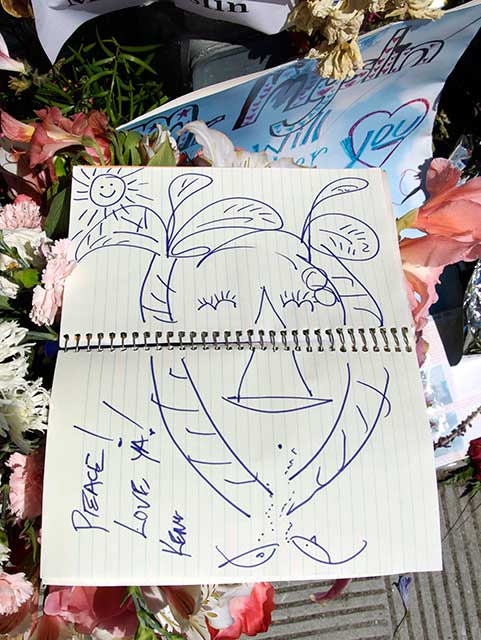 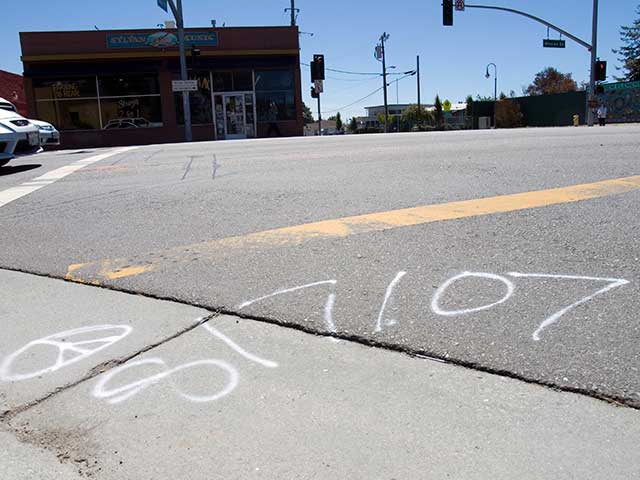