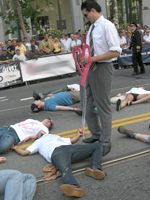 On Sunday, June 28, at least two groups of radical queer activists demonstrated against other contingents participating in the 2009 Pride Parade in San Francisco. Members of the International Jewish Solidarity Network marched and protested Zionist presence at the Pride Parade. The activists challenged the presentation of Israel as "diverse" and "pro gay" as they marched with banners that read "No Pride in Apartheid" and "Queer Jews Reject Israeli Injustices." Another group staged a die-in in front of Gavin Newsom's float at the annual Pride Parade to protest cuts to HIV/AIDS prevention, queer youth programs, and other vital services. Newsom's float was forced to stop during the demonstration. Gavin Newsom is currently campaigning to become governor of California in the 2010 election.

Photos: 1 | 2 | "No Pride in Apartheid at the Pride Parade!‏" announcement