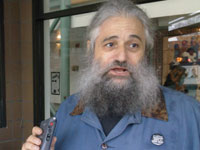 Robert Norse writes: "Over six months ago on Sunday, November 2nd, 2008, I was approached by a Metro security guard at the Metro Transit Center in downtown Santa Cruz. I was interviewing two homeless men for Free Radio Santa Cruz. The guard insisted I leave. I declined to do so. He called the police.

"The SCPD, instead of defending my right to be there and advising the Metro Security guards to stop bothering me, forced me to leave the property on threat of arrest. A Metro supervisor subsequently humiliated me further and banned me for the day because I was visibly tape recording the complaint I made to her and her response."

The case goes to trial on Friday, May 15th at 1:30pm in Department 1 of the Santa Cruz County Courthouse. The charge is refusing to leave a "business" when asked to do so. Attorney David Beauvais of Berkeley will be defending Robert Norse in the case. Attorney Kate Wells will be filing a subsequent federal lawsuit for damages. The trial will be before Judge Ariadne Symonds without a jury. City Attorney John Barisone, or one of his attorneys, will presumably be appearing for the city. Read more | Notes from the Defendant

See also: Ticketing for Standing and Talking at the Metro Bus Stop Sunday || Rotkin Claims: No Flyering Allowed at the Metro Center--Protest 11-26