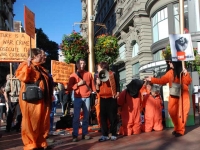 Sunday, January 11, a rally protesting U.S. torture at Guantanamo and around the world took place at Market and Powell Streets in San Francisco. A march through the surrounding Union Square shopping district with a line of orange-clad "prisoners" dramatized the plight of people caught in the U.S. detention system and was followed by concluding remarks at the Powell Street cable car turnaround. The rally was part of a National Day of Protest: Close Guantanamo and End U.S. Torture Policies Everywhere and was organized locally by World Can't Wait, Cindy Sheehan, Berkeley Fellowship of Unitarian Universalists Social Justice Committee, FireJohnYoo.org and Code Pink. The demonstrators condemned torture and rendition and demanded the prosecution of U.S. war criminals responsible for these acts.