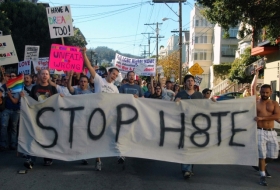 All Across The US: Nov 15th Protests Against Prop 8
November 15th Prop 8 Protests

Join the Impact organized nationwide protests on November 15th against Proposition 8 and other anti-gay measures that were passed in November 4th's election.

The San Francisco protest took place on the front steps of City Hall at 10:30am.

The Oakland protest took place in Frank H. Ogawa Plaza at 10:30am.

The San Jose protest saw thousands of people take to the streets.

The Santa Cruz protest took place at the County Courthouse.

The Sacramento protest took place in Cesar Chavez Park at 10:30am.

The Fresno protest took place in front of Fresno City Hall at 10:30am.

There was also a protest in Modesto at noon at the corner of Briggsmore & McHenry Ave.

Join The Impact writes:
In an effort to make a positive impact in the lives of our community, our allies, and even our opposition, JoinTheImpact.com emerged. Our movement seeks to encourage the LGBTQ community not to look towards the past and place blame, but instead to look forward toward what needs to be done now to achieve one goal: Full equality for ALL. We stand for reaching out across all communities. We do not stand for bigotry, for scapegoating, or using anger as our driving force. Our mission is to encourage our community to engage our opposition in a conversation about full equality and to do this with respect, dignity, and an attitude of outreach and education.... we stand for national unity in the face of opposing forces that have steered the conversation into a state by state issue. We will celebrate our state by state wins, but work as one large entity to help gain these wins and will unite in the conversation against us to plant the seed of change and community.