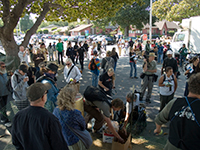 On September 3rd, police preempted the weekly gathering in Parking Lot #4 alongside the Santa Cruz Farmer's Market by occupying the space under the trees usually used by the drum circle and Food Not Bombs.

Santa Cruz Trash Orchestra writes, "In January, the community spoke and acted out to prevent our town from becoming as flavorless as Carmel. We will defend the drummers from police harassment and we will win again.

"This is merely the newest battle of a war in Santa Cruz. A war against dissent, against the poor, against the homeless, and now against people making music. We challenge these laws and the police crackdown on undesirables -- an effort to "clean up" the streets of Santa Cruz of the young, the very old, immigrants, the unemployed, homeless, the insane, and anyone who resists."

Invitations were posted to Santa Cruz Indymedia calling for people to participate on September 10th at around 3:00pm in solidarity with drummers, other musicians and friends playing music together. On Wednesday morning, stakes were pounded into the ground around the trees in Parking Lot #4 to set up fences blocking access to areas where people traditionally sit and chat, play drums, eat food, etc. The fences and several police officers were not enough to prevent people from singing, playing instruments, sharing food and reclaiming an important community space under the trees.