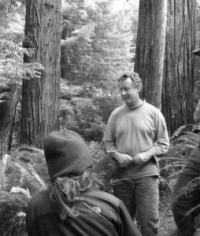 Eureka, CA-Community residents and forest activists from the redwood region and far beyond Humboldt County in Northern California, were relieved and elated as news spread of an unprecedented commitment by Humboldt Redwood Company (HRC) owners of what was Maxxam/PL land to spare the Nanning Creek and Fern Gully ancient groves where tree-sits have been keeping chain saws at bay. The message was delivered directly to tree-sitters and included a commitment to further protect from future cutting all old growth 250 years old or more.

"Old Growth now included in old PL timber harvest plans will be taken out of those plans", said HRC president and chief forester, Mike Jani, in an interview with KMUD radio in Garberville last week. This in itself is a significant change from company CEO Sandy Dean's position of just two months ago, when he stated, on KMUD and in the San Francisco Chronicle on Aug. 29, that HRC would be finishing up the former owners' harvest plans and that it would "take time" to switch over to the new forestry methods.