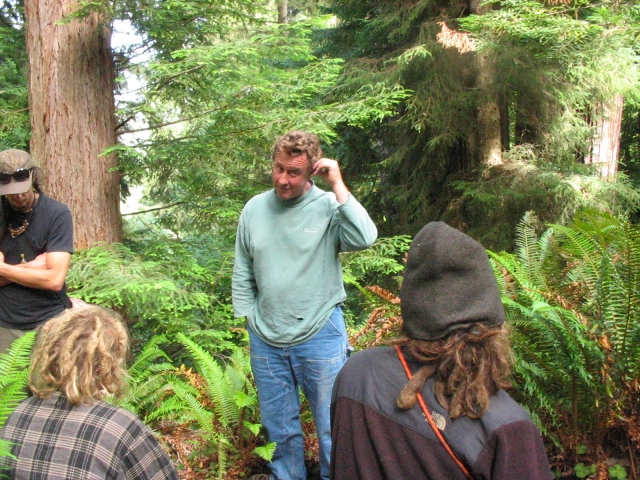 original image (1600x1200)
Eureka, CA-Community residents and forest activists from the redwood
region and far beyond Humboldt County in Northern California, were
relieved and elated as news spread of an unprecented commitment by
Humboldt Redwood Company (HRC) owners of what was Maxxam/PL land to
spare the Nanning Creek and Fern Gully ancient groves where tree-sits
have been keeping chain saws at bay. The message was delivered
directly to tree-sitters and included a commitment to further
protect from future cutting all old growth 250 years old or more.

"Old Growth now included in old PL timber harvest plans will be taken
out of those plans", said HRC president and chief forester, Mike
Jani, in an interview with KMUD radio in Garberville last week. This
in itself is a significant change from company CEO Sandy Dean's
position of just two months ago, when he stated, on KMUD and in the
San Francisco Chronicle on Aug. 29, that HRC would be finishing up
the former owners' harvest plans and that it would "take time" to
switch over to the new forestry methods.

Equally stunning was the manner chosen by forester Jani to convey the
message, delivering it directly to the forest defender tree sitters
themselves. He hiked in to Nanning Creek and the Fern Gully treesit
in Freshwater, near Eureka. Activists have been treesitting in these
areas to protect old growth for the past three years. Both the
Nanning and Fern Gully THP's are due to expire in late fall of 2008.

Approaching the ancient tree called "Spooner" in Nanning Creek near
Rio Dell, Genai called to the sitters to let them know it was safe
for them to come down. Safe for whom, the sitters wanted to know,
themselves, or the tree? After receiving assurances that no harm
would come to either, the sitters descended to dialog with the
forester. They expressed deep gratitude to the company for sparing
these and other such irreplaceable trees left standing on lands
recently acquired by HRC when Maxxam/PL's long bankruptcy case was
settled. The activists said they believe that if the terms of No
logging of old growth, No clearcuts, No herbicides are followed there
would be no need for treesits.

Jani praised the tree sitters for their perseverance and dedication
to the cause, telling them the trees are still standing because of
their actions. The trees were then unmarked and "no cut" tape was
strung around the groves. A small amount of strictly limited second
growth may be logged near the Nanning Creek grove, but otherwise, "it
will never be a THP again", said Jani.

HRC has also upgraded the marbled murreltt habitat at Fern Gully to a
higher category of protection, from PL.'s previous level 'C' to level
'A'. The Fern Gully grove is near Freshwater, the site of multiple
tree sits and fierce protests against PL's attempts to cut ancient
trees in 2003.

"It feels a bit surreal", said local teacher, long time activist and
tree sit supporter, Jeannette Jungers, in response to the news. "Mike
Jani and the company deserve our heartfelt thanks, for adopting a
more sustainable, respectful, and we hope, restorative kind of
forestry". Regarding Jani's kind words for the tree sitters, Jungers
said: " It feels like going from being considered an environmental
terrorist to being a hero in one fell swoop!" Hermes, a forest
activist who had spent a year defending old growth in Freshwater he
was momentarily speechless when told the news, adding " This has to
be one of the happiest days in my life".

Some important questions remain: for example, the accelerated harvest
of the last two decades under Maxxam management has left PL holdings
depleted and streams ravaged. After Maxxam's takeover in 1985, the
cut soared to nearly 300% of replacement inventory, sparking the most
massive forest protest campaign to 'Save the Old Growth' and apply
sustainable forest practices ever seen in the country to date.

"When MRC/HRC CEO Sandy Dean says HRC is going to cut 30% less than
PL did, that could still be too much", said Naomi Wagner, another
long term North Coast resident, activist and forest watcher . "What
we need to look at is rate of harvest compared to their forest
inventory.

"We'll be keeping an eye on them", said a Fern Gully treesitter, "to
make sure they don't clearcut under the guise of 'variable
retention' or 'group selection' (intensive forestry methods), or
start spraying herbicides". He also added a hope that other
companies, like Green Diamond (formerly Simpson timber) and Sierra
Pacific Company (SPI), whose practices are still largely ecologically
damaging would follow the example of a move to better practices.

Mendocino county resident and activist Mary Korte said she celebrated
the preservation of old growth anywhere, but she mourned the loss of
the old-growth in Mendocino county, where the same Fisher family that
owns HRC runs Mendocino Redwood Co.

"Time will tell if the company will keep its promises--if so, it will
be a new day for forestry in Humboldt county, and truly, an end to
the timber wars as we knew them", declared Jungers' "What a relief!"

Photos of Jani's visit to the tree-sits can be found at link.

END_OF_DOCUMENT_TOKEN_TO_BE_REPLACED
Add Your Comments
Latest Comments
Listed below are the latest comments about this post.
These comments are submitted anonymously by website visitors.
TITLE
AUTHOR
DATE
Compromised Part II
Jeff Muskrat
Compromised
Jeff Muskrat
Support Independent Media
We are 100% volunteer and depend on your participation to sustain our efforts!