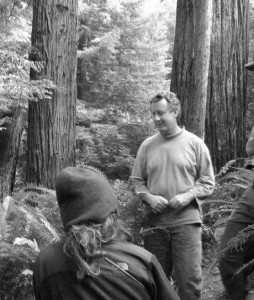 It’s official as of Tuesday when Mike Jani, Chief Forester of Humboldt Redwood Company, and fellow Forest Defenders / Activists accompanied Jani to both tree villages as well as the grove around the tree “Jerry” on Tuesday afternoon.

Both tree-sits were granted a class 1 and class 2 (boundary) preserve status, which grants full protection over the direct groves. More details can be found on this article here.

It’s been years, but the work of forest defense has finally paid off with these sits! I, and fellow defenders are still in shock of this recent news. But as we said last night in the below KMUD Radio interview, we’re still keeping at it!
http://efhumboldt.org/
§KMUD News Report
by KMUD repost Monday Aug 18th, 2008 1:02 AM
Listen now:
Copy the code below to embed this audio into a web page:
Download Audio (17.0MB) | Embed Audio
KMUD news story regarding the transition from outdate logging practices, to setting aside old growth.
Add Your Comments
Support Independent Media
We are 100% volunteer and depend on your participation to sustain our efforts!