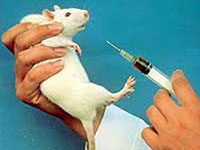 Animal Liberation Press Office writes, "The home of one UC Santa Cruz vivisector and the automobile of another were burned early Saturday [August 2nd], in what local authorities are calling attacks by animal liberationists. No communiques claiming the actions have yet been received by the North American Animal Liberation Press Office as of Sunday afternoon [emphasis added]. According to a San Jose Mercury News reporter, the automobile of a vivisector whom police refused to name was completely destroyed, while the damage to the home of animal abuser David Feldheim was limited to a door frame and smoke damage. Feldheim is fond of terrorizing and killing mice in his research, which according to his website, involves the "viral introduction of genes into living mouse brains."

"The attacks occurred four days after a customer at Caffe Pergolesi, a downtown Santa Cruz coffeehouse, found fliers listing the names, home addresses, home phone numbers and photos of thirteen UC-Santa Cruz vivisectors. Police believe unidentified animal rights activists created the fliers, which were made to appear as "wanted posters." The fliers warned: "Animal abusers everywhere beware; we know where you live; we know where you work; we will never back down until you end your abuse." Read More

Will Potter, an independent journalist who focuses on how the “War on Terrorism” affects civil liberties, writes, "First, it should be noted that no animal rights group like the Animal Liberation Front has claimed responsibility. Yet the FBI has recklessly labeled this “eco-terrorism,” just like the recent Seattle arson, before the smoke had even cleared. We’ve seen plenty of instances when the government later says “oops, it wasn’t ‘eco-terrorism’ after all.” And we’ve seen other instances, like the attempted murder of Judi Bari, when the FBI framed activists. In short: reporters, activists, and the general public need to slow down, step back, and stop blindly trusting the “official” story provided by the FBI."

Faculty Rally at UC Santa Cruz in Support of Firebombed Colleagues | Commentary by Will Potter, GreenIsTheNewRed.com | Corporate Coverage and Discussion