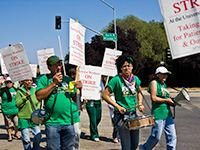 8,500 University of California workers represented by the American Federation of State, County, and Municipal Employees (AFSCME) initiated a five-day strike at UC’s ten campuses and five medical centers. The strike, which began on July 14th, concluded on July 18th. At issue are poverty wages as low as $10 per hour. Many employees work 2-3 jobs and qualify for public assistance to meet their families’ basic needs.

UC wages have fallen dramatically behind other hospitals and California’s community colleges where workers are paid family-sustaining wages that are on average of 25% higher. In addition, when workers have stood up for better lives for their families and better working conditions, the University has retaliated by violating labor laws.

96% of service workers are eligible for at least one of the following forms of public assistance: food stamps, WIC, public housing subsidies and subsidized child care, creating a potential burden for CA taxpayers. Increasing wages would not only help lift workers out of poverty, but could positively impact CA and the low- and moderate-income areas where UC workers live as they contribute more to their local economy. Read More