In Santa Cruz we will be picketing from 6AM - 8PM Monday through Friday at the UCSC campus entrace at 1156 High Street, Santa Cruz 95060. We will also have rallies at noon and 5pm. Please bring your people and join the line! 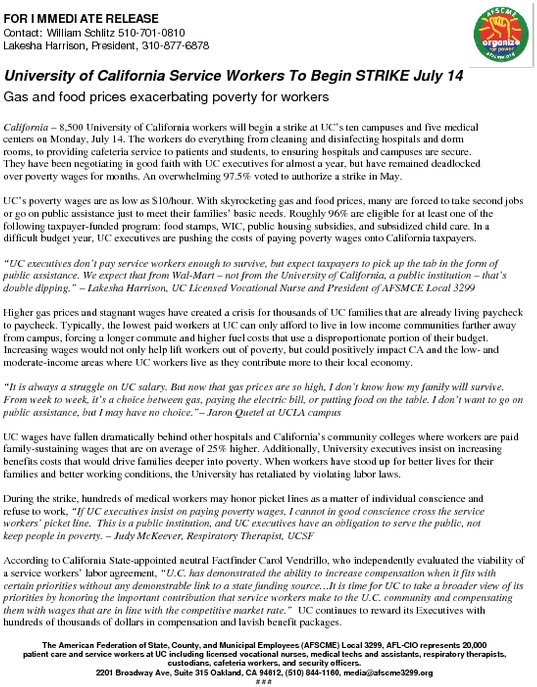 California – 8,500 University of California workers will begin a strike at UC's ten campuses and five medical centers on Monday, July 14. The workers do everything from cleaning and disinfecting hospitals and dorm rooms, to providing cafeteria service to patients and students, to ensuring hospitals and campuses are secure. They have been negotiating in good faith with UC executives for almost a year, but have remained deadlocked over poverty wages for months. An overwhelming 97.5% voted to authorize a strike in May.

UC's poverty wages are as low as $10/hour. With skyrocketing gas and food prices, many are forced to take second jobs or go on public assistance just to meet their families' basic needs. Roughly 96% are eligible for at least one of the following taxpayer-funded program: food stamps, WIC, public housing subsidies, and subsidized child care. In a difficult budget year, UC executives are pushing the costs of paying poverty wages onto California taxpayers.

"UC executives don't pay service workers enough to survive, but expect taxpayers to pick up the tab in the form of public assistance. We expect that from Wal-Mart – not from the University of California, a public institution – that's double dipping." – Lakesha Harrison, UC Licensed Vocational Nurse and President of AFSMCE Local 3299

Higher gas prices and stagnant wages have created a crisis for thousands of UC families that are already living paycheck to paycheck. Typically, the lowest paid workers at UC can only afford to live in low income communities farther away from campus, forcing a longer commute and higher fuel costs that use a disproportionate portion of their budget. Increasing wages would not only help lift workers out of poverty, but could positively impact CA and the low- and moderate-income areas where UC workers live as they contribute more to their local economy.

"It is always a struggle on UC salary. But now that gas prices are so high, I don't know how my family will survive. From week to week, it's a choice between gas, paying the electric bill, or putting food on the table. I don't want to go on public assistance, but I may have no choice."– Jaron Quetel at UCLA campus

UC wages have fallen dramatically behind other hospitals and California's community colleges where workers are paid family-sustaining wages that are on average of 25% higher. Additionally, University executives insist on increasing benefits costs that would drive families deeper into poverty. When workers have stood up for better lives for their families and better working conditions, the University has retaliated by violating labor laws.

During the strike, hundreds of medical workers may honor picket lines as a matter of individual conscience and refuse to work, "If UC executives insist on paying poverty wages, I cannot in good conscience cross the service workers' picket line. This is a public institution, and UC executives have an obligation to serve the public, not keep people in poverty. – Judy McKeever, Respiratory Therapist, UCSF

According to California State-appointed neutral Factfinder Carol Vendrillo, who independently evaluated the viability of a service workers' labor agreement, "U.C. has demonstrated the ability to increase compensation when it fits with certain priorities without any demonstrable link to a state funding source…It is time for UC to take a broader view of its priorities by honoring the important contribution that service workers make to the U.C. community and compensating them with wages that are in line with the competitive market rate." UC continues to reward its Executives with hundreds of thousands of dollars in compensation and lavish benefit packages.